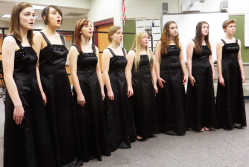 The 12 NPHS students earned the privilege of competing at the state level after receiving gold ratings on their Group I performances a few weeks ago at Avon High School.

Students were evaluated by a judge in the categories of intonation, tone quality, breathing technique, note accuracy, rhythmic accuracy, diction and enunciation, interpretation, musicianship and other factors.

The North Putnam results are as follows:

Special recognition was awarded to Samantha Flannelly for earning a perfect score on her vocal solo.

Kelly Thomas is the director of the North Putnam High School Choirs. Kathi Elliott serves as the accompanist.