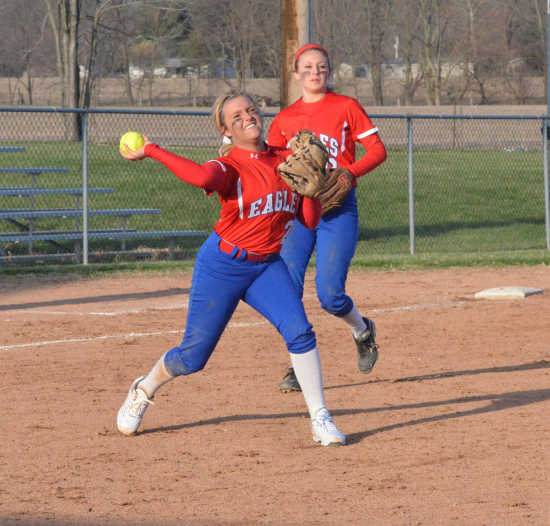 The Eagles were able to win the second game of their doubleheader at Cloverdale 7-3. (Banner Graphic/TRENT SCOTT)

After watching opening day and two days this week lost to Mother Nature's lack of consideration, the 2014 softball season finally opened for Cloverdale and South Putnam as the two squads split a doubleheader Tuesday night.

A topsy-turvy opener fell the way of the hosts as the Clovers scored five times in the sixth inning to take an 11-8 win over the Eagles.

Cloverdale head coach Brian Knapp said that the squad had hot bats and a steady effort on the mound in the first game.

"The bats were alive in the first game when they needed to be," Knapp said. "Our freshman pitcher (Lauren Meek) threw great. We might have held her in too long in the second game with game tomorrow and Friday but she did a great job.

"Our young girls hit. They knew what was required of them and they did everything that we asked them to do."

The visitors scored in the second inning before Cloverdale answered with two in the third inning. Jessica Winders drove in Megan Helterbrand with a double and scored later in the inning for a 2-1 lead.

South Putnam scored in the fourth to tie the game at 2-2 before Cloverdale got its first big inning of the game with four runs in the bottom half of the inning.

A pair of errors allowed Jessica Winders to double home a pair of runs, followed by Kelsey Helterbrand doubling in two more.

The Eagles scored a pair of runs in the fifth and briefly took a 7-6 lead when Katie Hewitt delivered with a three-run home run.

Cloverdale answered with five in the bottom half of the inning to wrap the game up.

The Clovers batted around the order as Kelsey Helterbrand delivered the big hit with a bases-clearing triple that secured the win.

Game two belonged to Makenzie Trisler after the South Putnam catcher blasted a pair of homeruns and plated five runs in a 7-3 win for the Eagles.

"I'm really proud of my girls overall," Sullivan said. "We started five girls who were on a varsity field for the first time. Jitters were spread out all over the place.

"By the second game, that was our team. The squad kept their heads up after the first game and the girls did a nice job to pull out the second game."

While the ball was still being scalded across the diamond, Brooke Cundiff induced more hits towards the fielders than in the previous game, keeping the Cloverdale offense in check to the tune of three runs.

Meanwhile, Trisler provided all the offense needed with a pair of blasts. Hewitt doubled with two outs in the third and Trisler took Meek over the left field fence to give the Eagles a 3-0 lead.

Trisler then repeated the trick in the fifth inning, taking the first pitch in the at-bat back over the left field fence for a three-run home run to give the visitors a 6-1 lead.

South Putnam added one more run in the inning and limited Cloverdale to a run in the sixth and seventh innings to salvage a split of the doubleheader and prevent a 0-2 start in conference play.

Cundiff's first two games on the mound for the Eagles were also important elements to the game according to Sullivan.

With a game against Clay City Friday still left in the week, Knapp said the squad would need to show their mental strength early in the season, especially on the mound.

"We'll take a look at Lauren but we've got a couple of other girls we can throw," Knapp said. "We saw some things that we have and looked to mix things up tonight. We're 11 strong and they'll be okay as they go through the season."

South Putnam had Thursday off in preparation for the Braves Bash in Terre Haute Friday and Saturday. Sullivan said the squad needed to approach that game in the right frame of mind.

"I want us to go out confident and I hope that, coming off this win, they'll do that. We'll have to bring out best game over to Terre Haute and everyone has to show up ready to play."