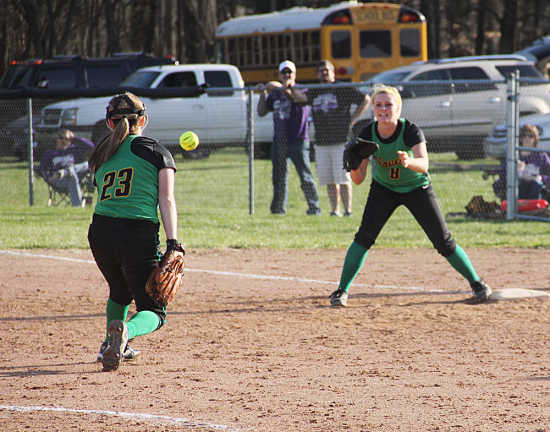 Cloverdale freshman pitcher Lauren Meek fields a ball and makes to toss to sophomore Kimmy Winders at first. Winders had a three-run homer in the opening inning of the 5-2 win against Clay City. Meek pitched all seven innings and held the Lady Eels to their two runs on six hits. (Banner Graphic/JAY LOCKETT)

After a Clay City at bat with no score, sophomore Kimmy Winders of Cloverdale, batting fifth in the lineup, knocked one out of the park driving in freshman Kelsey Helterbrand and senior Rebekah Jordan.

"We got a home run with Kimmy," said Cloverdale coach Brian Knapp said. "It's her first of the year. She's a hitter. That's why she's there."

After three more innings, Clay City was still unable to score. Meanwhile, in the third inning, RBIs by Helterbrand and sophomore Lauren Patterson made the score 5-0 Clovers.

"It's all about your approach to the game," said Clay City coach Jason Sinders. "We have a lot of focus. It's a mental game. We didn't quit. That's always good. Its just one of those things."

The defense of the Clovers was the story of the matchup as the Lady Eels were unable to score until the fifth inning, when Alexis Price was able to bring in sophomores Alyssa Yocom and Raven Allender for Clay City. 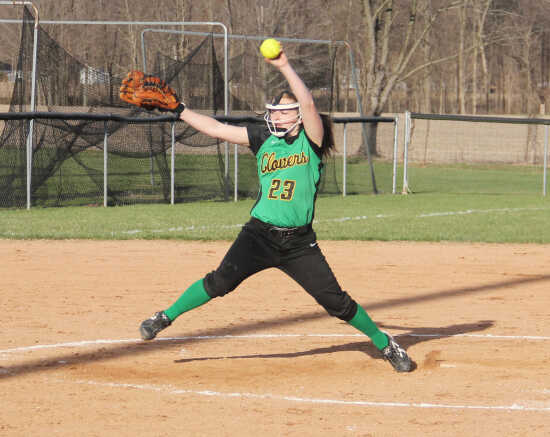 The pitching of freshman Lauren Meek was too much for the Lady Eels, as was the Cloverdale defense. Meek was able to close out the Clay City lineup with two runners onbase. She finished with three strikeouts and didn't allow a hit until the third inning.

"Defense was huge," Knapp said. "It was awesome tonight. No errors. That's how you win ball games. That's what it takes. Clay City is a good team. They're well coached. It's always a back and fourth battle and we always look forward to playing them."

The Lady Eels' pitching tandem of senior Whitney Jeffers and Price totaled four strikeouts, and Sinders said it would've taken just a little more on Clay City's part to pull off the victory. 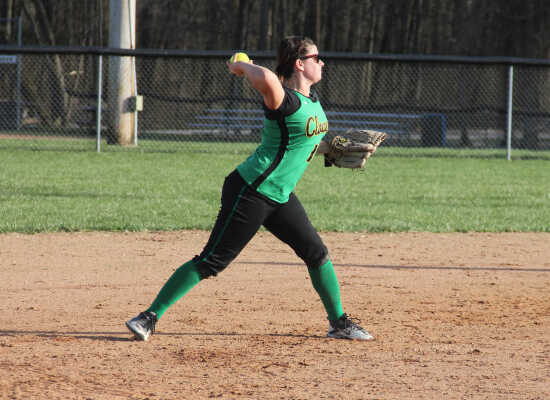 "We got some good hits," Sinders said. "We were ready to go today. Cloverdale just played a little harder. They scoreboard shows that."