Bosma calls on Lincoln himself to help emphasize GOP message

Invoking the words of Abraham Lincoln himself in closing his Putnam County Lincoln Day address Sunday afternoon, Indiana Speaker of the House Brian Bosma charged Putnam County Republicans to "do their duty."

It is important, Bosma said, to convey the party's mission and philosophy in an effort to help reverse national trends and continue the success Indiana has experienced the past 10 years. 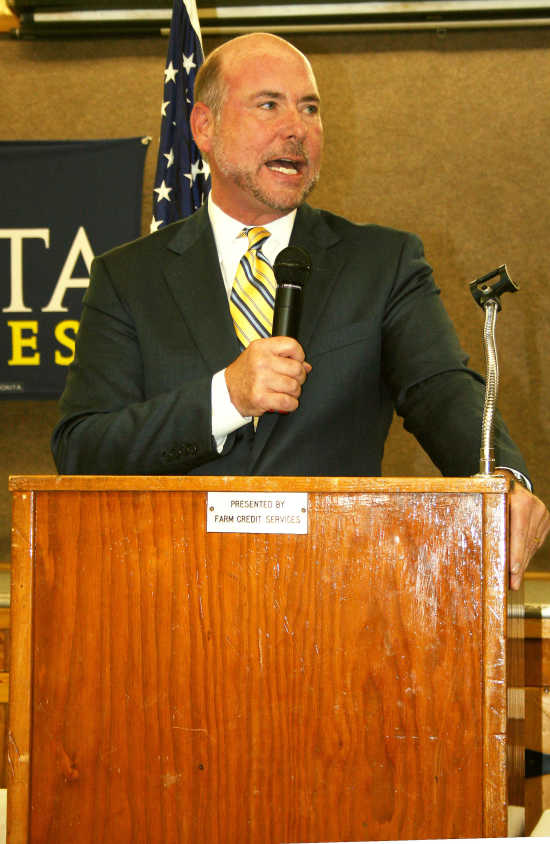 Challenging Putnam County Republicans "to do their duty" and help spread the word about the mission and philosophy of the party, Indiana Speaker of the House Brian Bosma addresses the local Lincoln Day audience Sunday at the Community Building on the local fairgrounds.

Expanding on that theory, Bosma said Hoosiers, like the Putnam County folks in attendance at the fairgrounds Sunday afternoon, "just need to do their duty." Inherent in that, he said is voting and organizing the party at the grassroots level to ensure the government they want to see.

America could do well, Bosma suggested, to emulate the success of Indiana has seen the past 10 years, rebounding from what he called "dysfunctional government" to enact major legislation during 2014 alone that will provide first-time state funds for pre-kindergarten education for low-income children to investing $400 million in roads and bridges to enacting measures to improve Indiana's workforce.

"Ladies and gentlemen," Bosma said, "let me tell you, you need to be proud of what your legislators have done."

Since 2005 when a new Republican majority emerged in the House, Bosma said things have been on the upswing in Indiana.

"We had a vision to change how Indiana works," the speaker said.

And as a result, Indiana has the fewest state government workers per capita in the nation and owns the lowest residential tax rate in the country.

"We had a vision of freedom from overregulation," he added, and that ultimately has led to the elimination of 40 boards and 400 bureaucratic appointments and this year alone, the repeal of 4,000 pages of Indiana code that Bosma called "burdensome for Hoosiers" and how business was being done in Indiana.

The Legislature, he said, also had a vision of "every Hoosier voting, and voting just once."

He stressed that voter ID laws, currently under attack by the Democrats and their secretary of state candidate Beth White of Marion County, are vital to ensuring a proper election.

"Voter fraud, prior to photo ID," Bosma said, "was rampant."

The Indiana voter ID law simply makes Hoosiers offer photo identification "to prove who you are, something you had to do at Blockbuster, back when there was a Blockbuster," the keynote speaker pointed out.

Meanwhile, Indiana Secretary of State Connie Lawson, who represented Putnam County for 16 years as a state senator, told the gathering she was running her first statewide campaign, while noting that her opponent "wants to undo all the recent election reforms," including voter ID and online registration.

"The changes we've made," Lawson stressed, "make it easier to vote and harder to cheat." 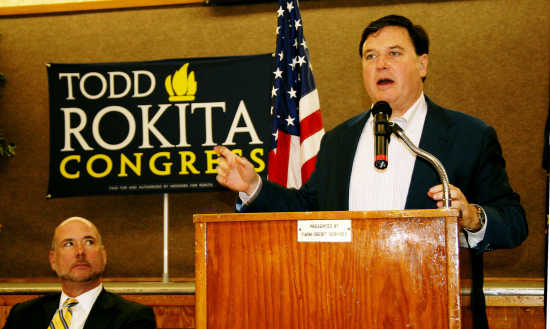 She praised Putnam County voters for their past support and asked for it again this year.

"I know that without Putnam County I would not be secretary of state today," she said. "I look forward to working alongside you again."

"It is not good," he said, "to take away photo ID at the polls. We need to keep Indiana a shining example of what election reform looks like."

Comparing his Republican party and the Democrats in power nationally, Rokita said the GOP has always trusted people to run their own lives while the other side of the political aisle tends toward government running peoples' lives.

He called that discrepancy "a dependency of government vs. the blessing and dignity of work."

And he turned to the Bible for an example of the work ethic Hoosiers and Republicans hold near and dear.

At the core of the situation, the congressman said, is that "as Republicans, we fight for everyone so they can build better lives for themselves and their families."

"We said 'enough was enough,'" he said, "and we were going to live within our means and end the endless borrowing of funds."

To do that, the General Assembly did things like repealing the lifetime health care benefit for legislators.