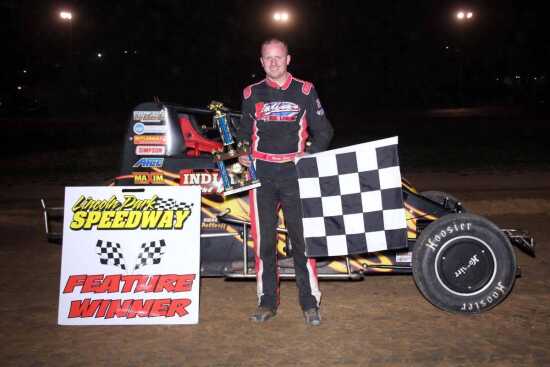 Brady Short celebrates his sprint car victory at Lincoln Park Speedway in the winner's circle, by posing with his trophy in front of his winning car. (Banner Graphic/CAREY FOX)

PUTNAMVILLE -- Saturday evening's racing card at Lincoln Park Speedway proved to be fast and tight as three of the four A-mains came down to the final lap.

Brady Short doubled up on the weekend, capturing the LPS sprint car feature a night after picking up the victory at Bloomington Speedway.

Short had his hands full with a three-way challenge to the checkered flag before edging out Chad Boespflug and Brent Beauchamp. 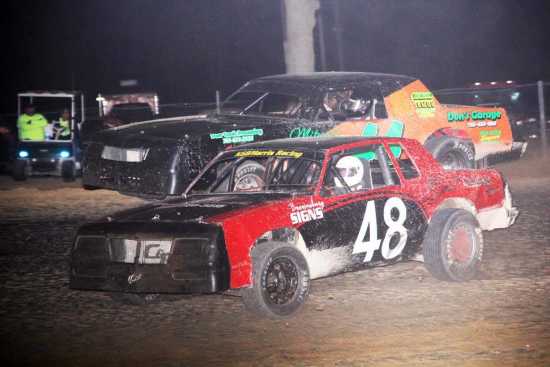 C.J. Bryan (No. 48) and Blake Cross (No. 44) battle for the lead during the early stages of Saturday's bomber feature. Bryan went on to pick up the victory and the $500 payday. (Banner Graphic/CAREY FOX)

The UMP Modified feature had plenty of the same thrills and uncertainty for fans of Jesse Cramer and Kenny Carmichael Jr.

The pair swapped the lead multiple times over the second half of the feature before Cramer took home the victory coming off the final corner in the R&R Construction, Davis Automotive, Vanhorn1.com No. I12.

The closest finish of the evening came in the UMP Super Stock feature as Doug McCullough went door-to-door with Kenny Carmichael and Josh Boller for the last few circuits before he picked up the victory by inches in the Freeman Signs, Shaefers Collision, Patterson Driveline and Machine sponsored No. 19m.

In the $500-to-win bomber feature, C.J. Bryan put Mike Harris' No. 48 ride into victory lane, holding off challenges from McCullough and Blake Cross for the Spring Fling victory.

The sprint car field rolled out with Jeff Bland and Seth Parker starting out front, but luck wasn't on Bland's side this evening as he spun on lap two as Hunter ONeal brought out the red flag with a roll over.

Once the field went green, Short had the lead ahead of Parker and Beauchamp, who were set to duke it out for numerous laps ahead of Dakota Jackson, Boespflug, Chris Gurley and Troy Link.

Ten laps into the A-main, Short and Parker were working over the field out front.

Parker had the top line figured out as Short held the advantage on the bottom. As the laps ticked off, Boespflug joined the party and snagged the lead on the 21st lap coming off of turn two. That advantage lasted just a lap as Short re-took the point and pulled out to a small lead ahead of the Paul Hazen-owned No. 57 machine of Boespflug, Beauchamp and Parker.

Once he gathered the lead for the final time, Short never looked back as the J&D Motor-powered No. 11p held off the final lap challenge from his competitors. Boespflug was just behind the leader in second-place with Beauchamp, Parker and Gurley wrapping up the top-five spots.

Cramer started ninth in the field for the UMP Modified race with Randy Lines and Jimmy Hayden in the front row.

Kenny Carmichael Jr. and Lines were side-by-side early ahead of the fast moving Cramer and Dan Lewellen.

Cramer and Carmichael put on a show for the fans, working side-by-side in front of Lines, Lewellen and opening night winner, Randy Shuman.

With five laps remaining, a blanket could have been put over Cramer and Carmichael as the duo opened space over the challengers.

Carmichael held fast to the cushion up top while Cramer rolled the bottom.

On the final lap, Carmichael got into the loose stuff on the top of turn one and Cramer nosed to the lead.

The drivers went into the final turns nearly even before Cramer got just enough drive off turn four to capture the victory in his Diamond Race Car.

In the super stock feature, misfortune for early leaders came into play as Cullen Goodman and Dustin Shoulders fought for the top spot through the first 13 laps before a red flag came out for a fire in a car that had left the track.

Goodman and Shoulders appeared to be the main contenders for the win.

However, Goodman couldn't re-fire after the red flag and Shoulders pulled off the track a lap into the re-start.

McCullough assumed the lead with Carmichael Sr. and Josh Boller challenging three-wide down the stretch ahead of Carmichael Jr. However, McCullough and Boller were the ones fighting for the win on the final laps. The two went to the finish line together as McCullough outraced Boller to claim his first feature win of the year.

Carmichael Sr. was third ahead of Carmichael Jr. and Travis Heramb.

McCullough threatened to double up on feature wins as he got behind the wheel of the No. 19M bomber, starting behind Mark Dickerson and Blake Cross to start the A-main.

Dickerson's luck turned sour early as he cut a tire after contact on the second lap and Cross grabbed the lead ahead of McCullough.

After a lap four re-start, Bryan and McCullough were up front and battled to the checkered flag over the remaining 16 laps.

Bryan picked up the win by several car lengths ahead of McCullough, Cross, Johnny Lane and James Walters.

This weekend will be a regular show featuring sprint cars, modifieds, super stocks and bombers.

General admission for adults 11 years of age or older is $13.