Author Steingraber to give Earth Day lecture at DePauw 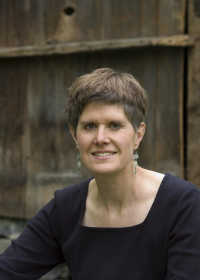 At some point our lives, each of us will know someone with cancer. Some of us know many people stricken by the various forms of this disease.

Sandra Steingraber knew too many. She grew up in a small town in Illinois where an unusually large number of people, including family members, had suffered from cancer.

As a young woman she, too, experienced the disease. But as a scientist, she was compelled to ask why. Why so many? In her first book, "Living Downstream," Steingraber was able to document the relationships between manmade environmental contaminants and areas with high incidence of various cancers, known as cancer clusters, shedding light on a health problem that was our own creation, but one that we could also fix. With that, she triggered a movement to reduce our dependency on toxic and potentially carcinogenic chemicals.

Her book was used as the basis for a documentary film, and Steingraber's work attracted so much attention that one environmental organization called her "the new Rachel Carson."

As part of its recognition of Earth Day 2014, DePauw University's Environmental Fellows Program will welcome Steingraber to campus on Wednesday, April 23 to present a talk based on her work. Free and open to the public, the event is set for 7:30 p.m. in the Union Building ballroom at DePauw. It will be followed by a book signing.

Steingraber is an internationally recognized authority on the links between the environment and cancer and human health. Her many publications include three books, "Living Downstream: An Ecologist's Personal Investigation of Cancer and the Environment," "Having Faith: An Ecologist's Journey to Motherhood" and "Raising Elijah: Protecting Children in an Age of Environmental Crisis."

Called "a poet with a knife" by Sojourner magazine, Steingraber has received many honors for her work as a science writer. She was named a Ms. Magazine Woman of the Year and later received the Jenifer Altman Foundation's inaugural Altman Award for "the inspiring and poetic use of science to elucidate the causes of cancer."

An enthusiastic and sought-after public speaker, Steingraber has keynoted conferences on human health and the environment throughout the United States and Canada and has been invited to lecture at many universities, medical schools, and hospitals -- including Harvard, Yale, Cornell, Columbia and the Woods Hole Research Center.

She is recognized for her ability to serve as a two-way translator between scientists and activists. She has testified in the European Parliament, before the President's Cancer Panel, and has participated in briefings to Congress and before United Nations delegates in Geneva, Switzerland.

A columnist for Orion magazine, Steingraber is currently a scholar in residence at Ithaca College in Ithaca, N.Y. She is married to artist Jeff de Castro, and they live in a 1,000-square-foot house with a push mower, a clothesline, a vegetable garden and two children.