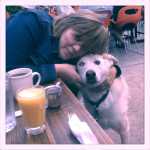 The Putnam County Public Library Author Series will feature a conversation with Abby Chew on Friday, April 25 at 7 p.m.

Chew will read from her book "Discontinued Township Roads" and local musicians Ron Dye and Anthony Mullis will perform after the reading. This is a free, adults only, after hours event. Wine and beer will be available for purchase.

"Abby Chew's 'Discontinued Township Roads' captures a country at once wonderfully strange and disconcertingly familiar," Fellow poet Colin Cheney said. "Chew's quick, measured lines breathe into the aching, resonant distances that exist between us: lovers, sister and brother, daughter and father. These poems are defined as much by what they leave unsaid as what they reveal: we glimpse a family's life in flared fragments, as a field revealed in lightning."

Chew is from Reelsville and graduated from South Putnam High School. She earned an MFA from the University of Iowa Writers' Workshop and a BA from DePauw University.

For many years, Chew herded goats and taught at Olney Friends School in southeastern Ohio. Then she packed her dog Alice in the truck and moved to Claremont, Calif., where she teaches at The Webb Schools.

Local singer-songwriter Mullis has been performing around the Midwest for more than five years. He performs under the moniker Gus Moon.

In 2012, he released a full-length album titled "Worn Out Shoes" and just last year released an EP called "Splendid Noise." In 2014, he will release two new albums and be traveling to promote the new material.

Dye is a professor of English at DePauw University and has worked professionally as an actor, stage director, playwright and musician.

Dye has been performing in the area as a solo singer-songwriter act, as well as lead vocalist and rhythm guitarist for the group Mongrel Dogs. You can find two videos of them live in the WGRE studio on the library's Vimeo site at www.vimeo.com/putnamcopublib.