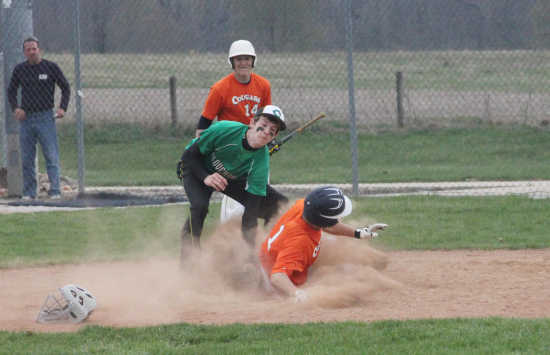 ROACHDALE--After surrendering a four-run lead to a one run deficit the North Putnam Cougar's baseball team came back with four runs of their own to get the victory 10-7 Monday night against county, rival Cloverdale.

"Our hitting was good and our pitching was good," Cougar's coach Phil Webster said, "It was the same mistakes we have been making all year. We make defensive mistakes. Our philosophy is to pitch it and play defense. The hitting will come along. We have to clean it up so we can complete our goals or else we will have an up and down year. We played well and they played well. It was a fun game to watch."

It was a promising start for the Cougars (4-3 2-1 WCC), who got out to an early 2-0 lead in the first inning and never looked back until the top half of the sixth. Senior Beau Green doubled off of right-hander Tyler Carter and senior Jordan Nauert singled and stole second to set up an RBI possibility. Sophomore shortstop Kyler Jeter came through, pushing across both runners with a single.

Both sides got through the second cleanly except for Nauert giving up a two out double to Clover first baseman Branston Scott. This put runnners on second and third because of a passed ball by the catcher on a Joseph Martin strikeout. Like the story of the night for the Clovers, they could not capitalize with runners on and Troy Davis struck out. "When we get in that position, we have to take advantage of that," Clover coach Bryan Archer said, "We're not doing a very good job of that. My boys are playing hard and they're having the right approach coming to the plate, but some points in the game we're just not getting the job done. That made a difference.

The other problem for Cloverdale (5-5 1-2 WCC) was they could not stop the Cougars from scoring after they got a score.

The top of the third inning pushed momentum Cloverdale's way getting four straight batters on base with only one out. Kade Shroer started the inning by popping out, but Andrew Howard reached on an error, Brayden White doubled and Tyler Carter walked to follow up. Duke Duff singled and drove in Howard, but two strikeouts left the bases loaded and the Clovers down one.

TheCcougars followed that by posting three runs in the bottom of the inning to push the lead to four. Coy Flynn and Shane Beaman both reached based, so with two outs Jeter could punish Carter with a three-run jack to right field.

"It feels good to come back," Kyler Jeter said, "It wasn't a bad slump, but it was a slump. It felt good to come out and get a couple hits off the bat."

Jeter has been in a slight slump as of late but went 3-for-3 tonight with a walk.

He had six RBIs for the Cougars.

Cougar outfielder Buck Buchanan also had a nice night at the plate. He went 1-for-2 with his third at-bat being hit by a pitch. He ground rule doubled in the fourth and came around to score on a Coy Flynn single. It was 6-1 at this point and looked bleak for the Clovers.

"It was a good feeling," Buchanan said, "I'm not going to gloat or anything, but it was the first ground rule double that I've ever had."

Once again, Cloverdale loaded the bases in the fifth with no outs, but both Martin and Jacob Roach struck out in consecutive at-bats to give a deep breath to North Putnam.

Only one run was driven in and two runners were left on to continue the Cloverdale struggle.

The Clovers did not allow the Cougars to score in the bottom half of the fifth to cut into the lead for the first time of the game.

"The game of baseball can switch momentum with an error," Webster said, "That's why you got to play defense. We believe the team that gives away the fewest free bases will win. That is key to high school baseball."

Cloverdale had a monstrous sixth inning. They scored five runs to take a 7-6 lead and forced Nauert off the mound. They had six hits in the inning including two doubles. As significant as this is, the bottom of the inning, erased all their hard work.

North Putnam came right back and scored four runs off of Kade Schroer. The first two batters, Nolan Ensor and Buchanan, were both hit by pitches and Schroer looked rattled.

Shroer got back on track, striking out the next two batters. With a chance to get out of the inning Green hit a ground ball to Carter, but he threw it over Scott's head, letting Green be safe and Ensor tying up the game.

Nauert hit a fielder's choice and all runners were safe with another run driven in.

Nauert scored on a Jeter single.

This was all the Cougars needed to grab a 10-7 victory, which they hoped to get a split out of.

Coach Webster said he wanted a split and they did that.

Now they would have a chance to steal the series Wednesday night at Cloverdale.

"It's senior leadership," Webster said, "When we got down the seniors came out and said we will get this. We got great senior leadership and hopefully we can bring some of the younger guys up there."

Brayden White for Cloverdale and Beau Green for North Putnam will face off Wednesday night. Cloverdale looks to get a split and the Cougars will be hungry for a sweep.

In the second game North Putnam saw a Cloverdale team with big hitting.

A big inning from Branston Scott in the third knocked in two runners and the Clovers were able to win decisively 8-2.

Brayden White pitched five innings and got six strikeouts for Cloverdale. Schroer finished up the game with five strikeouts.

That's now four times in a row the Cougars as a team have struck out in the double digits.