Lois "Jean" Winslow passed peacefully from earth to Heaven at 4:50 p.m. April 22, 2014 at Heritage Pointe, Warren, Ind. She was surrounded by her husband, her children and granddaughter Andrea.

She was united in marriage to Rev. Verl Wesley Winslow on Jan. 25, 1941 in Indianapolis. 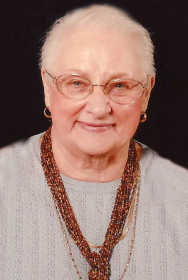 Jean was an excellent homemaker, cook and financier. The Winslow home was filled with storytelling, laughter, counseling and love. Mom's response to questions about life was to search the Scriptures. She was an avid reader and lover of The Word, which proved invaluable as a pastor's wife.

Following graduation in 1940 from Kokomo High School Jean graduated from Fox Beauty School and set up a beauty shop in her parents' home. She pursued this career while her husband was "seeing the world" during World War II. She also worked for Dr. Mayfield from 1948-50.

Jean began her college career by taking religion classes at Kletzing College in Oskaloosa, Iowa; she then studied history and English at IU Indianapolis; followed by science courses at Butler University; and graduated from Indiana State College with a teaching degree in 1963.

She received her master's degree in 1970. She was an excellent elementary teacher who required much from her students, but gave even more of herself to their education.

One of her fondest memories was a European tour as a sponsor with the IUK Singers in 1974. When asked, she would say her greatest blessings were finding Christ, marrying Verl, having three children and serving others.

Jean was preceded in death by her parents; a brother, Jack Fowler, and two sisters, Janice Davis and Joan Hancock, all from Kokomo.

Visitation will also be at the church from 2-4 p.m., preceding the service.

Stout and Son Funeral Home, Russiaville, Ind., is in charge of arrangements.

Online condolences may be left at www.stoutandons.com.