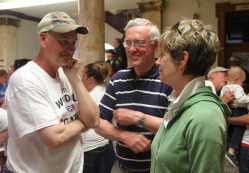 After Putnam County voters elected two new county commissioners in November 2012, they will put yet another new face in office in the November 2014 election.

That new face will be either Rick Woodall, who won the District 2 commissioner Republican nomination Tuesday night, or a challenger from another party.

He defeated incumbent Max Watts along with fellow challenger John Huber in the Tuesday primary.

The nominee expressed his excitement at the victory but also looked at the bigger picture.

"My first thought is 'Woo hoo!' But my big picture thought is this is just the battle," Woodall said. "The war is in November. We'll see what the Democrats do.

"I'm stoked. I'm truly humbled that I got that many votes. The team that we had was just awesome all throughout the county. I don't how long it takes for this stuff to sink in, given that I'm a rookie."

Woodall said the campaign so far has been a big learning experience, including exactly what the responsibilities and expectations of a commissioner are.

Watts has served as commissioner since he was elected by a caucus in September 2013. The incumbent expressed his disappointment Tuesday.

"I thought I had pretty good credentials when I came in here, with a lot of leadership background and a business background," Watts said. "But apparently, that's not what the county wanted.

"They did get a good man. Rick Woodall's a real good man."

Watts was also happy to say all three men ran a clean campaign.

"We had a real good race, a good, clean race," Watts said. "Along with that, John Huber was a great guy to run with also."

The Banner Graphic was unable to reach Huber for comment Tuesday.

Even with no re-election to worry about, Watts said he will continue to work hard for Putnam County until his term is up on Jan. 1, 2015.

"I'm going to continue for the next eight months to do a good job for the county," Watts said. "We have some things we've started, as far as the animal shelter and animal control. We're trying to get some grants, some federal money and some state aid money. And continue to work with the county highway garage. We've got some new things in place out there.

"We'll just continue to work hard for the county. I'm not going to let them down."

Meanwhile, Woodall will be preparing for the November election as well as, he hopes, a chance to serve the county as commissioner. He said he knows his business, S&W Feed Center, will be a busy place as the election approaches.

"I look forward to the door to the south end of the feed mill opening and closing a whole lot in the next few months," Woodall said.