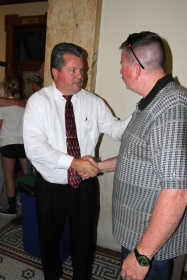 The Putnam County Courthouse was packed with a crowd eager to hear the results of the sheriff's race on Tuesday night.

When the last precinct summary reports came in and the final numbers were tallied, it was Scott Stockton who had won the race with 2,187 votes.

With 45 percent of the votes, Stockton won out against the other sheriff candidates, Craig Sibbitt and incumbent Steve Fenwick.

Trailing Stockton, Sibbitt received 35 percent of the votes with 1,683 votes and was composed, but admittedly disappointed by the final results.

"I had so many supporters and I feel like I let them down," Sibbitt said.

But he also maintained that he'd run a good, fair race and was thankful for all the support he'd received

"I was running for one reason, the people and my deputies," Sibbitt explained, "I feel good one way or the other."

Receiving 18 percent of the votes with 898 votes, Fenwick will maintain his role as sheriff until Dec. 1, at which time he may choose to return as a merit deputy with the department.

With recent allegations brought against the sheriff's dept. by the FBI, it appears Putnam County citizens desired some form of change from the status quo.

Stockton referred to his platform of departmental change as an important part of his success.

"I think there are some issues to be addressed," Stockton said, "I want to give the people the opportunity for a very clear, defined job description with an evaluation system."

Stockton also believes the Sheriff's Dept. should cooperate with other organizations more readily.

"...to do better work in concert with some of the other agencies and work as a team," Stockton said in regard to what he sees as part of his role if he wins the election in November.

"I don't care who gets credit for it, it's to provide the best service we can to the people of this county," Stockton said.

With the votes of Putnam County behind him, Stockton proceeds to the November election.

Democratic and independent candidates have until later this summer to announce their candidacy.

Fenwick was unavailable for comment at the time of publication.