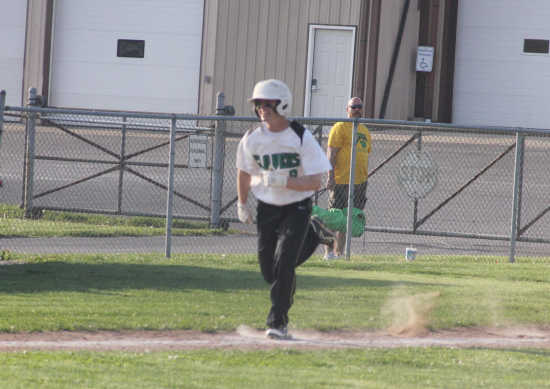 Duke Duff of Cloverdale makes his dash toward home plate and the win. He avoided the tag by Eminence to get the score for the Clovers. (Banner Graphic/JAY LOCKETT)

CLOVERDALE -- It was a little too close for the comfort of the Cloverdale coaching staff, but thanks to some late-game focus, the Clovers were able to come out on top Tuesday, 4-3 over Eminence.

Tyler Carter was the winning pitcher. He only gave up three runs with only one error by the Clover defense. Carter also came up big on the mound with 12 strikeouts.

"They weren't hitting my curveball or my fastball," Carter said. "I've been working on my curveball. They were swinging at low and outside pitches so I took advantage of the fastball as much as possible."

After a sacrifice fly by Andrew Howard in the first inning, Kade Schroer and Brayden White were able to score.

Dalton Atwood scored again for the Clovers in the fourth off of a sacrifice fly. The score was tied at three going into the seventh inning.

"TC (Carter) kind of struggled early," Cloverdale coach Bryan Archer said. "He didn't have his command down. But he gutted his way through it. He did a good job at finding his rhythm." 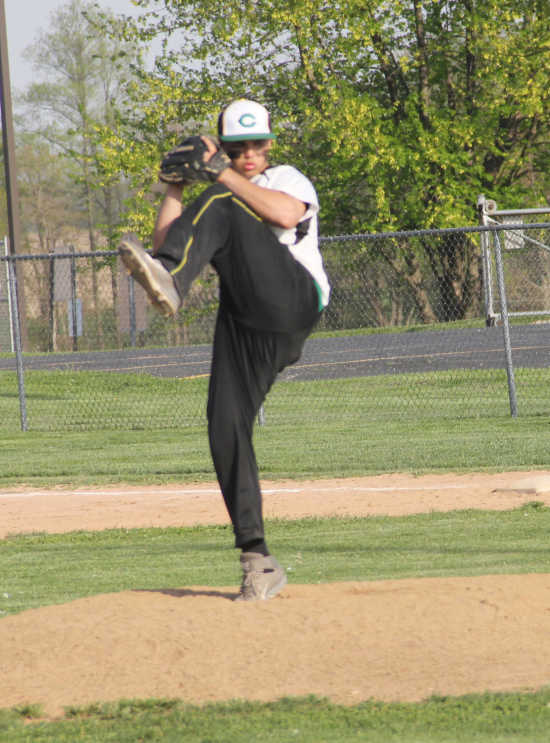 Tyler Carter was throwing mostly curveballs and fastballs in the Clover victory Tuesday. He finished with 12 strikeouts. (Banner Graphic/JAY LOCKETT)

After a great defensive stand by the Clovers, they had the chance to take the lead and the win.

Duke Duff got on base with a single to center field and then he stole second to get into scoring position. Then, on an Eminence error, he made it to third.

Kade Schroer was hit with the ball to get on and it was White coming to the plate with the winning run at third.

"I was just trying to do enough to get that run for the team," White said. "These are the easier games to focus when it's closer."

With the count going long, White drilled a fly ball to deep right field and that hit enabled Duff to get to the plate and slide in for the game-winning run.

"Brayden did a good job at the end," Archer said. "He knew he had a job to do. We just said 'hit it hard somewhere.' We had runners in the infield. That's what he did. Duke Duff did a good job being aggressive."

The next game for Cloverdale is at White River Valley on Thursday. After that game they will play county rival Greencastle on May 19 and 20. Archer says the team will be looking for more convincing wins in the future.

"I think we didn't win the way I would've liked," Archer said. "We didn't play as well offensively. We got to take advantage of the other teams' weaknesses."