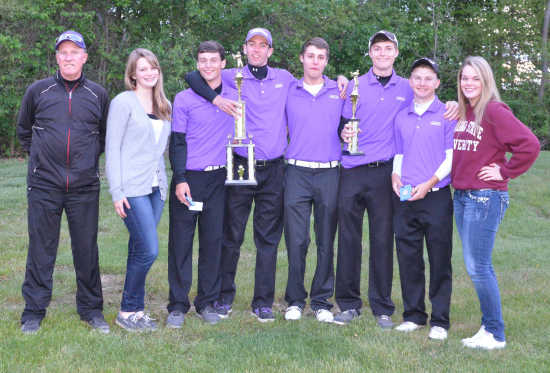 CLOVERDALE -- For the second time in five days, Luke Brotherton was in the playoff round for a tournament win.

This time he claimed medalist honors at the Putnam County Golf Tournament Thursday night against a fellow Tiger Cub.

Brotherton birdied a playoff hole against teammate Alec Davis to claim the top spot, as the senior duo helped lead Greencastle to the county title with a score of 156.

North Putnam finished second with a round of 168, followed by Cloverdale at 174 and South Putnam at 199.

Brotherton and Davis were joined on the all-county team by Jake Buis, who carded a 38. Tanner Dean's 44 rounded out the team score while Carl Basile came in at 49.

"Tonight was a good tune-up for this time of the year," Paquin said. "It was a little cool and wet out there but 156 is a good score. We had three really fine scores of 37 by Luke and Alec and 38 by Jake. It was a good night and we're about there.

"We could use some putting work and a lot of shots were short today but we have a couple of matches and three weeks until sectional to keep working on those things."

Mason Asher carded 41, Austin Judy and Jake Holtze nailed down 42, Danny Smith came in at 43 to close the team score while Bennett Hazelgrove finished with a 44.

Brian Judy, assisting with the Cougars, said the squad felt they had a better round still waiting to be played.

"We are a very consistent team and we showed that tonight," Judy said. "We're very deep with six players and we had to leave one off the list tonight.

"They shot an average round this evening. They're capable of better but we need to get a little bit more mentally tough. If they can get their arms around that, they're certainly capable of shooting better.

"They know as a team they dropped some strokes that they wouldn't normally drop," Judy added. "As a team, they feel that they can do better than they did tonight. Every week, they're working on their mental game and getting better at it. That's what we're working on and for as we move towards sectional play."

Cloverdale was paced by Rylan Mattock 40 and Chase Snyder's 42, with both making the all-county team.

Freddie Fislar and Aaron Whitlock carded 46's for the team score while Zach Nichols made the turn on 51.

Clover head coach Doug Wokoun said that the night held a mixed bag for the squad.

"Rylan and Chase both played pretty well tonight," Wokoun said. "Chase had one bad hole but both played well.

"Aaron and Freddy just had bad break after bad break. They couldn't overcome things that happened to them on the course. Golf is like that sometimes."

"You have to give North Putnam credit," Wokoun added. "They didn't play great either tonight but they found a way to get things done."

"I think tonight was harder than the WCC match because if you make mistakes, there isn't as much room to make it up.

Saturday, we had the chance to make up for some mistakes and we did that. Tonight, we just couldn't do that."

The weather played havoc with Cloverdale's schedule over the past two weeks but Wokoun was interested to see how the squad would be able to handle the constant match play.

"We've got four matches next week and we're hoping the weather will warm up for us," Wokoun said. "I'm looking forward to seeing how we play next week because everyone is playing better now than they were a couple of weeks ago.

"If we can catch a few breaks, I really look for good things."

Derek Chestnut came in at 38 to become South Putnam's lone all-county representative. Jimmy Rutter and Austin Query scored 53 while Tyler Neumann chipped in 55 and C.J. Menke came in at 57.

Even with a full squad for the county match, South Putnam head coach Kevin Metz said the squad was a little bit off Thursday night.

"Some of the other guys got off to rough starts and weren't able to recover from that and led to some of the high scores tonight."

Chestnut's round was the highlight of the night for the Eagles and Metz said that he hoped it would spur the rest of the squad on over the final few weeks of the season.

"Greencastle has a good, solid team," Metz said. "Derek has been our horse that we've ridden all year. Hopefully he keeps that up and has a good sectional run for us this year.

"In the last couple of weeks we have here, we're hoping everyone else gets back on track and we can match the round of 178 we have scored already this year."