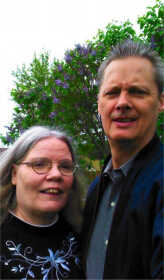 Patty and Douglas Jerving of Milwaukee celebrated their 35th wedding anniversary on Monday, May 19.

Patty is the former Patty Tellas of Reelsville.

Patty and Doug's marriage has outlived a lot of things.

The hotel where they met during a Christian conference in 1978 burned to the ground after it was hit by an airplane several years after their wedding. The building above a fish store where the wedding was held in an upper room has been torn down as well.

The wedding reception took place in a pavilion in a park but that building was also torn down and another was rebuilt. They had their picture taken while standing beside a tree in that park on their wedding day, but five years later it was cut down. The pastor who married them died in 2010.

For this special 35th anniversary, they had wanted to get a room in the lakeside hotel where they had spent one of their honeymoon nights, and to eat at the same restaurant where they had had dinner that night, but that restaurant doesn't exist anymore.

The bride had her first taste of lobster on their honeymoon so having a lobster meal every anniversary since has been a celebration that has stayed the same over all these years, and this year was no different.

As their hair has grayed and their waistlines thickened, their love and devotion to each other has only grown stronger.

"My length of pride and joy for my parents' union overwhelms me at times," daughter Faith Ferra said. "I have always looked on their marriage with envy, respect, and awe. I am happy they never gave up on each other even thru those hardest of times."

Cards and letters to the couple from friends and family would be cherished and most welcomed.