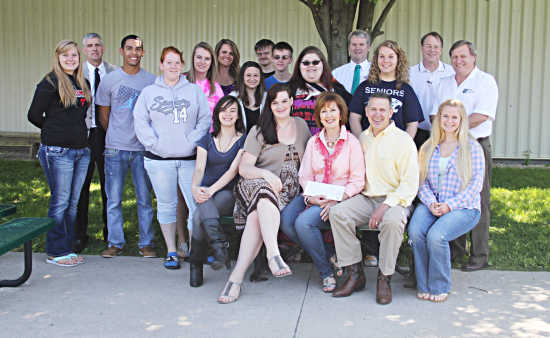 Flanked by Alyssa Bolin, the student who nominated her, and husband Ron, Area 30 culinary arts instructor Mary Anne Birt (seated center) accepts her 2014 Putnam County Teacher of the Year award. Surrounded by her students, Birt was presented with her awards by Gary Neese and Ken Heeke of First National Bank, Dean Gambill of the Putnam County Community Foundation and Daryl Taylor of the Banner Graphic.

No stranger to awards both for her cooking and her students' culinary creations, Area 30 culinary arts instructor Mary Anne Birt has a new award to add to her resume: Putnam County Teacher of the Year for 2014. 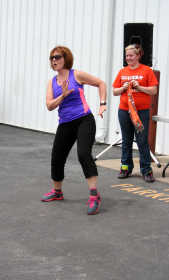 No stranger to a non-traditional classroom, 2014 Teacher of the Year Mary Anne Birt took an even less traditional approach recently, leading a Zumba class during a spring celebration at Area 30.

With more than 36 percent of the vote from a nine-person field, Birt rode a surge of online votes to the 2014 award. In the process, she netted a $500 cash prize from First National Bank as well as a $500 prize for Area 30, presented by the Community Foundation.

While the accolades and associated prizes are nice, Birt was perhaps most touched that the original nomination for February Teacher of the Month came from one of her own students, Alyssa Bolin, who is a junior at Cloverdale High School and a first-year student in Birt's program at Area 30.

"She's a great role model," Bolin said of her teacher. "I'm blessed to have her in my life because she's someone to look up to. And she's the best teacher I've ever had."

As a teacher who tries to cultivate not only cooking skills, but life skills in her students, Birt was impressed with the gumption Bolin displayed in making the nomination.

"I'm just really proud of Alyssa for taking the initiative and taking the leadership role to follow up with something she said she'd do," Birt said.

Bolin's initiative does not stop there. On the eve of her second year in Birt's classes, Bolin hopes to take her love of cake decorating and make it a career in baking.

"Mrs. Birt has really helped me a lot in that process," Bolin said. "She has really inspired me to get out there and do the things I want to do. She encourages it.

She's always got her students' backs. 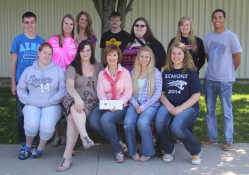 Mary Anne Birt celebrates her Teacher of the Year award surrounded by her culinary arts class.

"She's an amazing human being."

Not one to dwell too much on her honors, Birt says it is Area 30 that is so amazing.

"There's just something special about Area 30," Birt said of the career center that serves high school juniors and seniors from Cloverdale, Eminence, Greencastle, North Putnam and South Putnam high schools. "We have a lot of great staff, great students here."

With 12 years at Area 30 under her belt, Birt says the perceptions about career and technical education has changed over the years. Once considered schools for "troubled" students, career centers like Area 30 have become places for students who know what they want in their careers and need a place to go to begin working on those skills.

"We hone in on potential skills that (the students) may not realize they have," Birt said. "I'm really proud of all of our programs."

In a sense, Birt and her colleagues at Area 30 see the Teacher of the Year award as an honor for Area 30.

"I think the award is important to us because we don't get the recognition that the other schools get," Area 30 Assistant Director Chad Nunley said. "We have a lot of great teachers like Mrs. Birt at Area 30 and they don't often get the recognition."

Even when they do, they aren't necessarily comfortable with it.

"I don't see myself as 'Teacher of the Year' because there are so many good teachers," Birt said. "When you get into teaching, it's not because of the accolades, it's because of the way you get to touch so many students' lives. 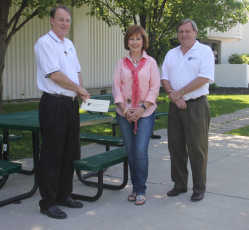 Birt was presented with her awards on Friday, May 23 by Gary Neese and Ken Heeke of First National Bank, Dean Gambill of the Community Foundation and Daryl Taylor of the Banner Graphic.

Representing the funding sponsors, Neese and Gambill had high praise not just for Birt, but for educators in general.

"As part of the community, these teachers are teaching our future. Our future revolves around the students," Neese said. "The better educators these students get, the better off we'll be as a bank, as a community, as a county."

"One of the areas we focus on (at the Community Foundation) is education because it impacts everything in the community," Gambill said. "If we can support our teachers and students, then that's just what we want to do."

The support of both organizations will be impacting Area 30 students in the coming year. Birt said she hopes to turn the school funds into some culinary equipment, and beyond that, into student services or scholarship funds. 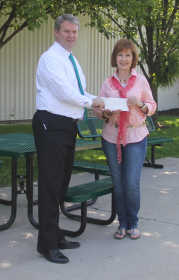 "I'm sure the kids will have some idea of how to spend this money," Birt said.

While the other $500 goes directly to Birt, some of it will likely make its way back to the students. After a bit goes toward a self-described "shoe fetish," Birt said she plans to hold on to some to help out her students.

"I just want to make sure that First National Bank, the Banner and the Putnam County Community Foundation know how important it is that they are showing this support to teachers," Birt said.

She also took a moment to thank the voters who helped her best second-place finisher Bill Royalty of Greencastle High School and third-place Laura Brentlinger of Deer Meadow Primary School.

Birt's 366 votes came from high school classmates in Frankfort and states like Georgia and Arizona. Some missionaries from Greencastle Christian Church even cast votes from Africa.

"I am very grateful to my family, friends, staff and students who voted for not only me but for my class," Birt said. "I also would encourage others to stop and take the time to nominate more educators. We need to see education and those who enter in it as important." 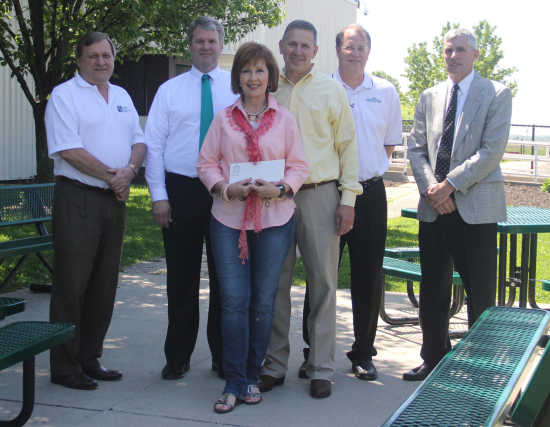