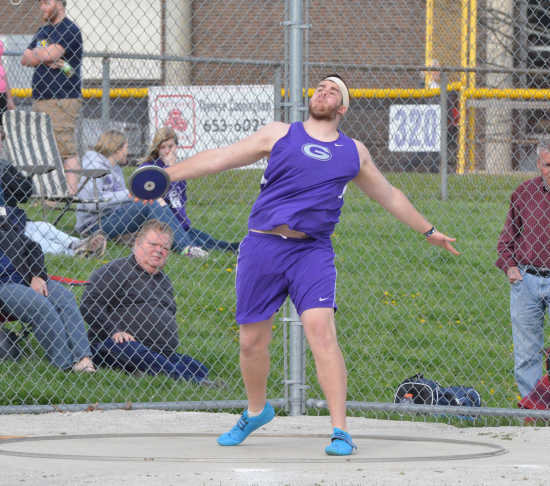 Wood threw a 142-08 in the discus placing him second on GHS's all-time list.(Banner Graphic/JAY LOCKETT)

Help can sometimes come from the most unexpected places. Soon in Greencastle it may be coming from a fierce offensive line-man whose size could help him to help others.

Tanner Wood is a senior at Greencastle High School. He plays football, track and is active in the arts department. In his free time this Tiger Cub has volunteered countless hours in the Emergency Department of Putnam County Hospital.

He continues to voulunter even after the completion of his Emergency Department rotation last year.

"I do a bunch of volunteering down at the hospital," said Wood. "Just here recently I've joined a volunteer fire department just passed my state test for EMT."

Tanner Wood has accomplished the majority of this while pulling personal bests on GHS's track and field and while clearing the way for Tiger Cub running backs.

"I've been playing football ever since first grade. That's just something me and my dad always did together," Wood said. "I actually didn't start track until my seventh grade year. My friend said 'will you come do track this year' because he was the only thrower. So I said 'yea sure.' I wasn't that good at it. I just got better and better with my senior year easily being my best."

Wood ironically switches from a sport where he is completely dependent on others and others on him, to a sport where all the pressure is inward. He believes that those two aspects are his favorite parts of the sports he plays.

"Track is almost more of an individual sport," Wood said. "I like that. In football no matter how good you are, if your team isn't good around you, there's not much you can do. In track, it's a team sport but you focus mainly on you."

Playing two sports brings a different kind of focus for each one, and the senior appreciates the differences.

"My favorite thing about track is how calm it is," he said. He nailed a throw of 142-08 in the discus that landed him second on the Greencastle all-time list. "It's so much different than football. On the football field it's bang-bang-bang."

Sports are one thing, but when you are playing well and lending a helping hand in the community where you grew up, it pays to have a good team in your corner.

Many people in Greencastle would say that Wood has a winning corner. Tanner has two brothers Trever and Trey and his parents Brad and Lisa are very well known.

"It's funny because everybody knows Momma Wood," he said. Lisa Wood volunteers a lot of time at Greencastle sporting events. "That's all I hear about. You always have your fan group and everything. But then when it gets completely silent and you hear your mom screaming for you. It helps. It really does. I'll never tell her that in person but it helps."

Wood also knows that having a coach so close has helped him in more ways than one.

"Football, that is how me and Dad grew up together," Wood said. "He wanted to make sure I had a good experience growing up. He was my coach almost every year I've played. If he wasn't head coach he was the assistant. Even in high school."

Brad Wood is the offensive line coach for Greencastle.

"He had another look," Tanner Wood said about his father. "It was like 'you're my son and I'm going to make you the best football player I possibly can.' Whether we are at practice or at home, we're still going to be practicing football.' That definitely helped me develop a lot."

Wood says the influence on his off-the-field ventures comes from yet another source of inspiration that the senior has been able to thrive on.

"All of that (volunteering) comes from the granddad I never really knew. That's my dad's dad. He was a reserve-police officer, a firefighter, and I'm pretty sure he worked on the ambulance as well," Wood said.

His mother, who recognized an interest in her son, pointed Wood in the right direction.

"One night I was siting with mom, watching 'Grey's Anatomy' and they had some trauma victim come in," Wood said. "She was squimish and I said, 'That looks like fun.'"

So Lisa Wood put Tanner in touch with her friend in the hospital and he enjoyed it so much that he spent almost every Saturday volunteering for a 12-hour shift.

"There's something about it that no other job can do."

Wood says that as his maturity grew so did his interest.

He began working more outside the hospital and he began to develop an affinity for the Emergency Medical Transport teams.

Wood's future could be in military as he is looking to possibly becoming a battlefield medic, a tactical medic for a S.W.A.T. team, or else a rescue diver. Wood hasn't yet decided exactly but he knows what he wants people to think when they are in need and they see him coming.

" I want to be someone that people want to have around," Wood said. "When no one else can help someone, I want to be like, 'I can help.'"