A 37-year-old Greencastle man is facing more than 130 years in prison following his arrest in an attempted rape and stabbing incident.

Keith Allen Shepherd made an initial appearance in Putnam Circuit Court Tuesday afternoon with Judge Matthew Headley entering not-guilty pleas on his behalf to five criminal charges stemming from an alleged Sunday morning attack at the Inn at DePauw.

Shepherd was taken into custody about 10 a.m. Sunday by Deputy Dwight Simmons after the reported rape attempt occurred about 8:45 a.m. in the basement laundry area of the hotel. The suspect was arrested at Hanna and Indiana streets, just a couple blocks south of the alleged crime scene.

The 23-year-old victim was cut on her neck (described by emergency room personnel as a "linear abrasion") and stabbed in the stomach (one-third to a half-inch deep). 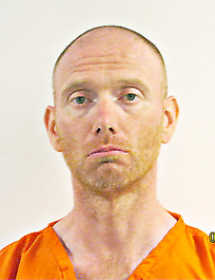 Those wounds were reportedly inflicted after the suspect apparently heard a noise as he tried to undo her uniform pants and pull off her shirt after encountering her in the secluded laundry room area of the inn.

The sudden noise reportedly caused the defendant to check a nearby corridor, and when he returned, he reportedly cut the young woman with a black-handled knife, took her cellular phone and fled the scene.

-- Theft, a Class D felony punishable by six months to three years in prison and up to a $5,000 fine.

Shepherd is also facing a habitual offender sentencing enhancement (an additional 30 years maximum) for having at least two unrelated felonies on his criminal record.

In court Tuesday, Shepherd surprisingly told Judge Headley he wanted to represent himself, and was ready to plead guilty to the charges then and there and accept his fate.

The judge, however, cautioned him to rethink that idea.

"You have every right to say 'I want to represent myself,'" Headley said, "but Mr. Long (Deputy Prosecutor Justin) and Mr. Bookwalter (Prosecutor Tim) over there have about 50 years experience between them, so ..."

"With all due respect," Shepherd responded before the judge could finish his statement, "I would like to get this over with and plead guilty today please."

"I'm not sure it's the best thing for you to do today," the judge said, "without you sitting and thinking about it."

"Your honor, I have thought about it," Shepherd, who admitted to just a seventh-grade education said, rejecting the idea of court-appointed counsel.

The judge then turned to Prosecutor Bookwalter for his assessment of what was transpiring.

"It's the state's concern," Bookwalter offered, "that if we proceed today, we're probably going to have a (case of) post-conviction relief on our hands."

Headley turned back to Shepherd, advising the suspect that the charges against him are "some of the most severe acts of criminal activity there is."

"You could go to prison for the rest of your life," the judge continued, explaining that he was going to withhold Shepherd's guilty plea for now. "I think Mr. Bookwalter's point is well taken," he added.

Headley appointed attorney Sid Tongret to represent the suspect, setting a pretrial conference in the case for 10 a.m. July 17.

In the meantime, Shepherd was ordered to have no contact with the victim of any members or her family or anyone else living in her household.

As of Tuesday afternoon, authorities had yet to locate the knife used in the incident. Shepherd instructed them to search the area around the Green Center at DePauw University where he remembered tossing the weapon and hearing the knife hit a hard surface (possibly rocks used for landscaping).

However, a search by officers and subsequent efforts with K-9 units have not turned up the weapon.

Meanwhile, DePauw Officer Matt Demmings did find the cellphone taken from the victim in a fenced area where the new splash park is under construction adjacent to the pool at Greencastle's Robe-Ann Park.

Shepherd had told investigators they would find the victim's cellphone in the construction area by the pool.