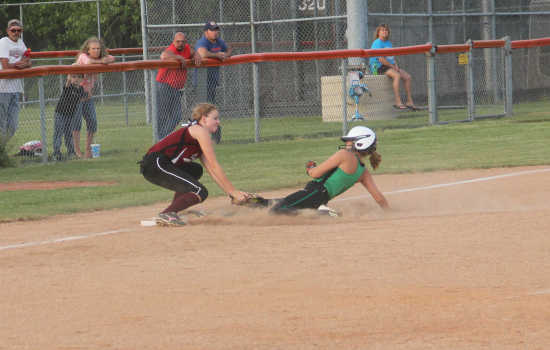 Freshman Lindsey Davis of Cloverdale slides into third base to beat the tag.(Banner Graphic/JAY LOCKETT)

Cloverdale finished the most decisive win on the Cascade sectional so far, handling the Warriors of Covenant Christian 15-3.

The win pushes the season to 17-8 for the Clovers who will be battling Monrovia today.

The big win was not enough for the Clovers or their coach who insists that despite the big margin there is even more room for improvement.

"There were too many defensive errors in that first inning and they put three up on us," Cloverdale coach Brian Knapp said. "They've been off for three days. Were they a bit rusty? I guess so. I didn't think they would be."

The errors included an overthrow at first base and some errors in the infield. This led to two runs scored against the Clovers in the first and another in the third.

It was all Clover batting and base-running after that.

After sophomore Kim Winders scored in the first, seniors Lindsay Robson, and Megan Helterbrand made it home thanks to a base on balls and a sacrifice fly from teammates.

In the third, three more runs were scored, including another big hit by Winders. Freshman Lindsey Davis, who was running for senior Heather Goss, also scored.

Senior Beka Jordan also got into the mix finishing off the inning.

"I'm happy because I don't want my season to be over," said Jordan. "I want to be playing in that (sectional) final on Thursday. "

In the fourth, Cloverdale ran away with the game. They scored nine in the fourth inning and closed out the Warriors at the top of the fifth ending the game.

They next play Monrovia who got the better of the two games played earlier first beating Cloverdale 12-2 and then again 4-3.

"Lets play ball," Knapp said. "We'll see where it all falls out. We're still on the roll. Monrovia is a good team. I mean they got us early in the season."

If payback will be served it will be on the shoulders of the Putnam County Champions who don't want to see the season end too early.

It's up to them this late in the season," Knapp said. "If they want to play ball then we'll keep playing ball. If they don't then we'll be done and we'll go home."