40-mile installation of new I-70 cable barriers to begin 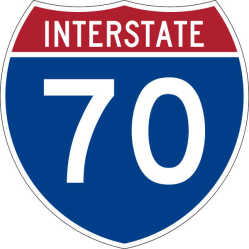 Two upcoming projects will affect drivers in Putnam County and west-central Indiana, the Indiana Department of Transportation (INDOT) has announced.

A project to install 40 miles of new cable barriers along Interstate 70 is scheduled to begin next week across Putnam and three other counties, while a project affecting travel along U.S. 40 through Brazil is also due to commence Monday, June 2.

The start of both projects is dependent upon the weather, of course.

INDOT has awarded a contract to install new median cable barriers along I-70 in Putnam, Hendricks, Morgan and Clay counties.

The contractor plans to begin work Monday from the 18-mile marker to the 58-mile marker. Left-lane restrictions will be in place nightly from 9 p.m. until 6 a.m. in the area in which the contractor will be working.

RMD Holdings of Chesterfield, Mich., is installing the cable barrier after submitting the low bid of $2 million. The I-70 project is due for completion by Nov. 22, 2014.

Cable barrier systems are lines of highly tensioned cables between anchored posts in the medians of roads. They are designed to control cross-median crashes, which produce half of all severe outcome crashes and nearly two-thirds of fatal crashes nationwide.

Since beginning a pilot program in 2005, Indiana has installed 369 miles of median cable barrier statewide at a cost of $30.7 million.

Meanwhile, INDOT also announced that construction is set to begin on or after Monday on the U.S. 40 project in Brazil. No detour will be necessary.

State Road 340 will close Monday from U.S. 40 to just west of Brazil's Waterworks Road. The contractor will be reconstructing the pavement on S.R. 340, including new storm drainage structures. The intersection of U.S. 40 and S.R. 340 will be realigned.

This section of the roadway is due to reopen in early October.

The U.S. 40 pavement replacement project was awarded to Gradex Inc. for $19.7 million.

The project will replace the pavement on U.S. 40 from S.R. 340 to the Brazil Walmart. Drainage will be improved with new storm drainage structures, curbs and gutters. New sidewalks will be constructed with ADA-compliant curb ramps throughout the project.

INDOT reminds drivers to use caution and consider worker safety when driving through a construction zone.