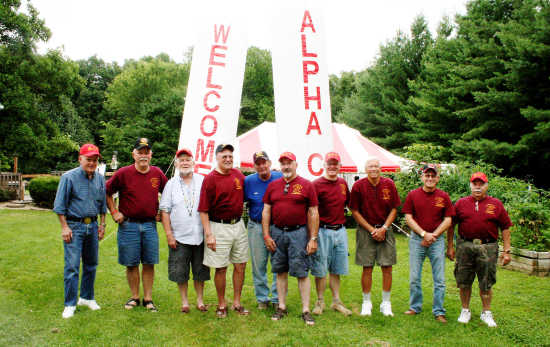 While that statement seems to emerge as a cliché for every successful sports team, close-knit work unit or just a tight bunch of old friends, Greencastle resident Del Brewer and his Alpha Company, 1st Battalion, 7th U.S. Marine Corps Regiment buddies embody it.

Saturday at Brewer's Saddle Club Road home in Madison Township, 10 of the Marines from the weapons platoon that participated in the first major American offensive in the Vietnam War gathered to reminisce and renew friendships fostered in the landing vehicles, jungles and rice paddies in and around Van Tuong, South Vietnam.

Literally sharing war stories, the Marines recalled the uncertainty of combat, the apprehension of awaiting enemy contact and the universal difficulties of getting older.

"We're all a little older and a little slower now," offered Brewer, the personable 72-year-old Greencastle attorney and former Putnam County prosecutor. "We don't look as tall and straight as we used to.

"Believe it or not, we used to be a rowdy bunch," he laughed as the men around him quietly looked on, more of them sipping from water bottles than anything stronger.

The group recalled how green they were 49 years ago next month when they made an amphibious landing in support of Operation Starlite, long considered the first major Vietnam War operation conducted solely by American forces. It was launched on Aug. 18, 1965 under intense secrecy.

"We were the greenest of the green," Setser, the unit's commanding officer, noted.

Most of the men had been "in country," as the Vietnam War era lingo came to call it, less than three months. They landed Aug. 14 and the offensive kicked off in earnest four days later as a pre-emptive strike against an assembled Viet Cong regiment 1,000 strong. The goal was to nullify the threat on the vital Chu Lai base and ensure its powerful communications tower remained intact.

Operation Starlite was conducted as a combined arms assault involving ground, air and naval units with some Marines deployed by helicopter insertion into the designated landing zone while the amphibious landing deployed other Marines.

"So it was quite an attention getter," Setser commented, noting that American forces killed more than 600 Viet Cong in major fighting that lasted only two days.

The unit had been cautioned in advance that combat could be as intense as the Battle of Iwo Jima, one of the bloodiest conflicts in the Pacific during World War II.

"It didn't turn out that way," Brewer said, "but you never know that going in." 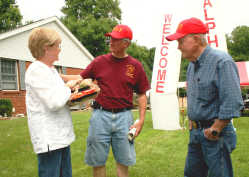 "I was just happy to get out of that amtrack," Setser said of the amphibious landing vehicles that brought them to the beach.

Setser and Brewer and the group in town Saturday served an auxiliary role in Operation Starlite, but three weeks later, on Sept. 7, they led the way in Operation Piranha.

"We were in the first wave hitting the beach that day," Setser continued.

"Yeah," Lance Cpl. Ben Green of Virginia interjected, "back when they didn't think anybody hit the beach anymore."

Setser said the amphibious landing his group made was possibly the only one of its kind during the Vietnam War.

And, to a man the Marines said popular culture is full of misconceptions about the Vietnam War and the men who fought in it.

"Have you seen 'Platoon?'" Setser asked, referencing the 1986 Tom Berenger-Charlie Sheen-Willem Dafoe film depicting the Vietnam War. "It doesn't even come close to anything that went on with this group."

Setser said the 1965 period was considered by military historians as the "last golden age of the Marine Corps."

"There were no drugs, no racial problems that ever materialized," the commanding officer assured. "Disciplinary actions were non-existent."

Most of the men of Alpha Company, 1st Battalion, 7th Regiment returned to the U.S. in May or June 1966 after a 13-month tour of duty in Nam.

"We came back to Camp Lejeune (North Carolina) and trained people to go to Vietnam, that was basically our job then," Sgt. Mike Wohl-ever of Ohio noted.

Saturday, as the other former Marines migrated back under the backyard tent to eat dinner -- featuring fish Wohlever caught and prepared -- Brewer stayed behind for a couple of parting comments.

"I'm proud of this group," Brewer assured while acknowledging the group is ever shrinking as it approaches its 50th anniversary get-together next summer.

Lt. Col. Setser agreed with that expression of pride.

"These guys didn't get any recognition when they came back home," he said. "I'm glad they're getting this attention now."