A Star Is Born at Putnam County Fair 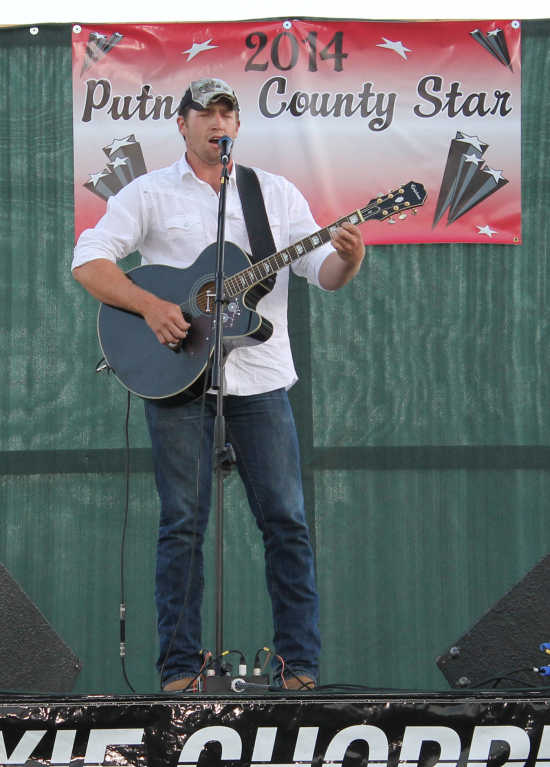 Performing his original song "What Happened to the Country," Cord Watkins puts the finishing touches on his winning evening at the 2014 Putnam County Star event Wednesday at the Putnam County Fairgrounds.

For all the work it takes to be a truly good singer, for some folks it just seems natural.

Cord Watkins is just that kind of talent.

Performing for a large audience for the first time this week, the 21-year-old Eminence resident wowed the crowds at the Dixie Chopper Free Stage to become the 2014 Putnam County Star.

"It's been great. There's a lot of great talent," Watkins said. "Believe it or not, this is the first time I've sung on stage. And that original song I did, it's the first time anyone except my family has heard it.

"It's just something I really want to do for a living, so I gave it a go."

The original song of which he spoke is "What Happened to the Country?" an throwback country song that laments the loss of traditional American values as well as traditional country music.

"That song I wrote for a lot of reasons," Watkins said. "The way the world is today. And I'm a big traditionalist in country music. This new stuff that I hear, I don't like it. So I kind of threw it in there. It was kind of going for a 'Are You Sure Hank Done It This Way' or a 'Country Boy Can Survive' song."

Watkins said he understood the risk in singing his own song, with even contest director Rick Johnston questioning the move. Ultimately Watkins felt he had to do it.

"I took a risk singing it, even Rick was saying that. He looked at me while I was on that stage and gave me that 'Are you sure?' look," Watkins said. "When it came down to it, that's what I wanted to play. I didn't care if it won or if it lost."

Before singing "What Happened to the Country," Watkins started the night off strong by channeling another country music traditionalist with a spot-on rendition of Josh Turner's "Your Man."

It wasn't as if Watkins was without competition on the night, with a number of memorable performances from his 10 female competitors.

There were strong return performances from Sarah Arnold, Marin Nally, Mariah Minnick, Shelley Douglass, Jodie Buis and Taylor Strong, all 2013 contestants who showed remarkable growth in their return to the finals.

But the night belonged to Watkins, who accepted his award from Johnston and 2013 Putnam County Star Melissa Claycomb, whose set following the show reminded the crowd just how good last year's competition was.

"When they called my name, I was happy as could be," Watkins said. "I couldn't really say much. I'm having a hard time right now with that."