Tharp among 15 to be honored by White House and USDA 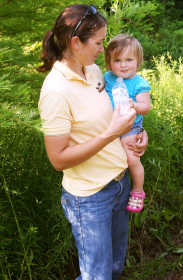 Beth Legan Tharp carries daughter Kate, 1, along a path on the family farm east of Greencastle earlier this week as representatives of the National Association of Conservation Districts visit the property to view conservation practices implemented on the farm. (photo by ERIC BERNSEE)

A second-generation Putnam County farmer is one of 15 "Champions of Change" headed to Washington, D.C., Monday and Tuesday.

The White House and U.S. Department of Agriculture (USDA) will honor Beth Legan Tharp and 14 other young farmer Champions of Change, leaders from across the country who are doing extraordinary things to build the bridge to the next generation of farming and ranching.

The champions are leading in their industries and communities, the USDA said, inspiring others who want to find careers and a life on the land, and providing food, fiber, fuel and flora around the world.

The Champions of Change program, as announced by President Obama during his State of the Union address, was created as an opportunity for the White House to feature individuals, businesses and organizations doing extraordinary things to empower and inspire members of their communities.

Tharp, along with her husband Nick and parents Mark and Phyllis Legan, owns and operates Legan Livestock and Grain, a commercial swine, corn and soybean farm east of Greencastle off State Road 240 (1498 S. CR 775 East, Coatesville).

She serves as chief financial officer of the Legan operation.

In listing her as one of the Champions of Change, the USDA noted that Tharp "lends her voice and experience to local community boards representing agriculture to connect her community with her passion for agriculture."

The White House program, which begins at 10 a.m. Tuesday, will feature USDA Deputy Secretary Krysta Harden discussing efforts to ensure that beginning farmers and the growing ranks of agriculture -- women, young people, immigrants, socially disadvantaged producers, returning veterans and retirees -- have access to the programs and support they need.

The event will include a discussion about how to continue growing and supporting the next generation of America's farmers and ranchers.

Besides Beth Legan Tharp, the other agricultural Champions of Change are:

Bill Bridgeforth, National Black Growers Council, Tanner, Ala. -- A fourth-generation farmer, he is employed by Darden Bridgeforth & Sons, which grows cotton, corn, wheat, soybeans and canola using a variety of cutting-edge agronomic techniques and land conservation practices. He is chairman of the National Black Growers Council, he advocates on behalf of Black farmers in the U.S. and abroad.

Kristin Fritz Kubiszak, MBG Marketing "The Blueberry People," Paw Paw, Mich. -- She is the retail manager for Brookside Farms, a fifth-generation family farm in southwest Michigan. After obtaining her bachelor's degree in social work, she returned home to her family farm that focuses on growing and packing blueberries for distribution through MBG's cooperative marketing network.

Lee Haynes, Nature's Best Egg Co., Cullman, Ala. -- An egg farmer from north Alabama, he returned to the farm after graduating from the University of Alabama and has held a key management role in his family farm ever since.

Melinda Litvinas and Jacob Hunt, University of Delaware Creamery and Windy Brow Farms, Newark, Del., and Newton, N.J. -- Melinda manages the UDairy Creamery at Delaware's College of Agriculture and Natural Resources and leads student interns and employees through their hands-on experience at the Creamery. Hunt is managing partner at Windy Brow Farms and Cow's Brow Creamery. After receiving a degree in Animal Science and Agricultural Marketing from the University of Delaware, he returned home to expand his family's small business by opening his own creamery. Each year 30,000 people visit the farm.

Fabiola Nizigiyimana, Worcester, Mass. -- Fabiola is a Burundian refugee farmer and a single mother of five who speaks five languages. In 2013, she was a founding member of the Immigrant Farmer Marketing Cooperative, a USDA-Rural Development project to assist socially disadvantaged farmers.

Quint Pottinger, owner of Affinity Farms, New Haven, Ky. -- Owner of Affinity Farms, a mixed row-crop and herb far, he pursued his education at the University of Kentucky, majoring in agriculture economics. Quint currently serves on the Kentucky Soybean Association board and has just started a year of service with the Corn Farmers Coalition.

Jesus Rodriguez, Washington State -- Born in Los Angeles, he is the son of Mexican and El Salvadoran immigrants. His family moved to Central Washington before he entered school to work in the tree fruit industry. Jesus will enter college this fall, pursuing a degree in horticulture, and hopes to be a field representative for a fruit warehouse or chemical company, and one day, own his own orchard.

Vena A-dae Romero, Cochiti Youth Experience, Cochiti Pueblo, N.M. -- Romero, who is Cochiti Puebloan and Kiowa Indian, is the granddaughter of a Pueblo farmer. She attended the University of Arkansas School of Law's Food and Agricultural Law Program, and now consults for First Nations Development Institute, a leading Native American nonprofit whose mission is to strengthen American Indian economies.

Pierre Sleiman, founder of Go Green Agriculture, Encinitas, Calif. -- CEO of Go Green Agriculture, an innovative company that grows produce inside climate-controlled greenhouses using hydroponics. He also sits on the board of directors of the San Diego County Farm Bureau and will graduate this year from the California Leadership Farm Bureau program.

Desiree Wineland, Cambridge, Neb. -- Born in Sweden, she became a U.S. citizen and served in the U.S. Army. Desiree and her family call Cambridge, Neb., home, where she raises grapes and operates a butcher shop.