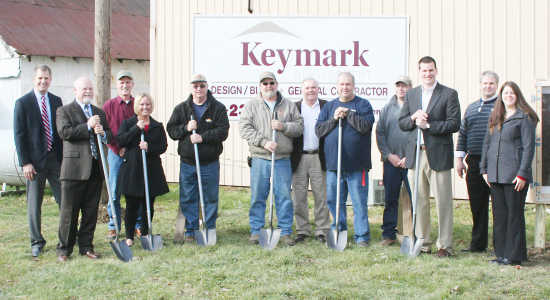 On Tuesday, Dec. 23, department officials gathered with several other parties to break ground on a new fire station. The project has been a long time coming, as the department purchased the land for the new project in 1985.

The groundbreaking marks the beginning of a $732,400 project to construct a new fire station to replace the current structure, one the department has long since outgrown.

FCVFD Treasurer Paul Heavin said the years of planning and saving are finally paying off.

"We've been working 25 years or so for it," Heavin said. "I guess it's finally gotten here."

That work has included years of the fire department's annual chicken barbecues, and countless other fundraisers, all with an eye toward a goal that had to seem far away.

However, that dedication by the department caught the eye of some other organizations that have helped out in the process.

First it was the Putnam County Community Foundation, through which the Fillmore Fire Department established both a non-endowed fund and an endowment.

Donations to the non-endowed fund have helped with the building of the firehouse. The endowment is meant to sustain the fire department long-term.

With the Community Foundation partnership in place, the department, working with grant administrator Kristy Jerrell of Jerrell Consulting & Grant Administration Services, then applied for a Community Development Block Grant through the Indiana Office of Community and Rural Affairs (OCRA).

This process brought in yet another partner, as the Town of Fillmore applied for the grant as the lead agency.

That effort came together earlier in December, with representatives of the department and partners meeting with Lt. Gov. Sue Ellspermann to receive a $400,000 grant to go toward the project.

"Without OCRA and the Putnam county Community Foundation, this would not be possible," Jerrell said at the groundbreaking. "It was a lot of entities that came together and collaborated and I think the state recognized that and saw the need."

"We want to be able to parter with community," OCRA West Central liaison Jill Curry added. "We are happy to partner with the town, the fire department and the Community Foundation."

No matter, though, the match has been committed and the project is moving forward, with Keymark Development of Terre Haute as the main contractor.

"We're happy to be part of this," Keymark President Jacob Hellmann said. "It's fun to work in small communities and build a first-class facility."

Hellmann added that Keymark has hired local contractors for the project wherever possible, with approximately $450,000 of the $656,000 construction contract going to local businesses.

"Putnam County is a special place," Jerrell said. "They try to get as many local contractors as possible to keep the money here in the community."

The facility itself will be a huge upgrade for the firefighters. The building that became current fire station was an old blacksmith shop on Hendricks Street that the department purchased in 1958. In the early 1960s, adjoining land was purchased and the cinder-block two-bay station was built. A one-bay addition was added in the early 1970s.

The building has served its purpose well, but the time for a new building has long since arrived. Not only has the size and scope of equipment used by community fire departments grown, causing the space to become extremely cramped, but the department's current headquarters is plagued by leaking ceilings, black mold and even a cracked foundation.

So plans came together in 2013 for an 8,125-square foot steel fire station (65 feet wide by 125 feet long), which more than doubles the size of the current building (3,362 square feet). The new station will include training space, more restroom and shower facilities, a kitchen, storage and space for six trucks.

Although the station will be built on some of the same land the current station occupies, it will also have direct access to Main Street, with trucks able to pull directly onto Main from the land between Fillmore Town Hall and the Fillmore Post Office.

This access improvement was not lost on District 44 State Rep. Jim Baird, who along with District 24 State Sen. Pete Miller, was present for both the grant presentation and the groundbreaking.

"Response time for first responders and fire departments is critical," Baird said. "With these folks having a better facility, maybe they can improve response time."

The increased space and up-to-date construction will also make the new building much more than a fire station. It can be a community gathering place and even a potential shelter following a disaster, given its steel construction.

"It's is a community building and it will serve during a natural disaster to the community to shelter themselves short term or long term," Jerrell said. "I think it's important to move beyond the 1950s or 1940s design that's here and have a structure that could withstand a direct hit itself. I think that's one of the goals of the fire department."

On a lighter note, the new station will provide a much different place for the department to host its September chicken barbecues.

Department Vice President Terry Wood shared with the Banner Graphic how many members of the community were upset during the 2014 chicken barbecue, having heard it would be the final barbecue hosted by the department.

Wood and his fellow firefighters had to laugh. While funds have been raised for the new station, the need for the department to raise money will continue for future projects. And while the new station will take up the land where the tent used to be erected for the barbecue, the festivities will simply be moved into the building.