County wrestlers end season at regional, Shaffer on to semi-state 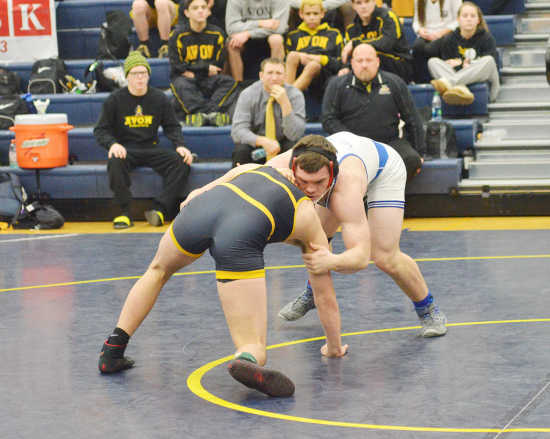 By the time the event concluded in the mid-afternoon hours, only South Putnam's Kyle Shaffer remained as the No. 10 wrestler at 182 pounds added a regional title to his sectional crown a week ago. 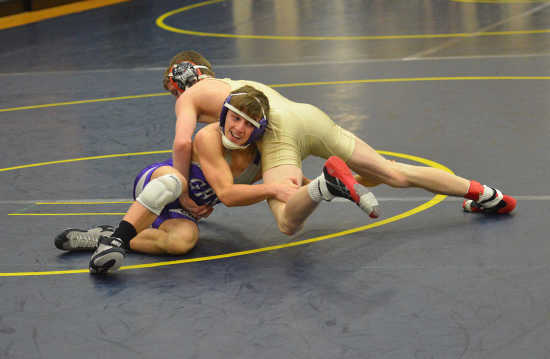 South Putnam was saddled with news before the event started that an injury to Joe Masters would prevent the junior from competing at 285 pounds.

Kieffer Vittetow was first to fall for the Eagles during the regional, losing to Plainfield's Isaac Gomez at 120 pounds before Jacob Lorimer was ousted by Mooresville's Brody Boles at 126 pounds.

Senior Bradley Ballard departed later in the morning, knocked out of the tournament by Monrovia's Dristin McCubbins. 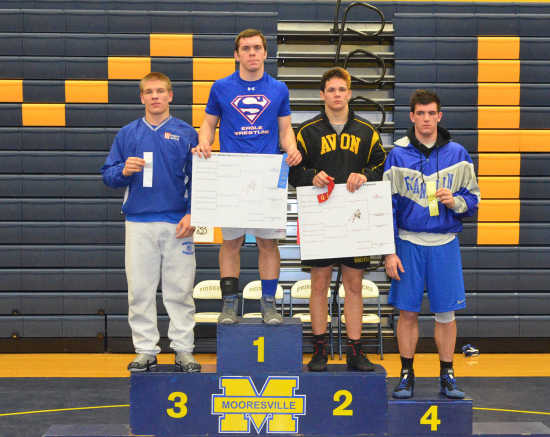 Kyle Shaffer stands atop the podium after his regional victory at Mooresville. (Banner Graphic/TRENT SCOTT)

South Putnam head coach Josh Hendrickson said the other members of the Eagle wrestling squad had tough draws but each performed admirably.

"The other three guys were fourth-place finishers, so we knew they were long-shots coming in here and wrestling No. 1 seeds," Hendrickson said. "They came out, wrestled tough and almost hit their move but didn't quite come out on top."

Greencastle head coach Charlie Pingleton said the young squad met most of its goals and now had a foundation to build off of next year.

"They wrestled well," Pingleton said. "Some of these guys had goals of being regional qualifiers as freshmen and they accomplished their goals this year.

"We're going to work forward from here. The goal next year is to get to the semi-state and state, so we'll work hard this spring and summer to see how far we can go.

"(Cook and James Brown) were awesome to have as captains," Pingleton added. "They led by example and that's going to be hard to replace next year.

"(Boswell, Carrington and Ruiz) are going to be leaders next year. We have about 15 eighth graders coming in next year, with a handful that wrestle year-round.

"We're expecting big things and these guys are going to have be leaders and get everyone on the same page."

Cloverdale senior Jacob Gibson, in as an alternate for Tri-West's Max Kirk, came up short against Whiteland's Ryan Hammond at 182 pounds.

The results left Shaffer as the sole Putnam County representative and the undefeated sophomore did not disappoint, winning his first match of the day by fall over Monrovia's Ivan Wray to secure a semi-state birth.

Shaffer then matched wits against Franklin Community's Damon Munn in a match that had one of the best finishes of the day.

The first takedown of the match went to Shaffer, who was reversed by Munn later in the period, leaving the pair tied at 2-2 entering the second period.

Shaffer scored another takedown in the second period and held a 4-2 advantage after four minutes which grew to 5-2 when Shaffer escaped to start the third period.

Munn scored a takedown shortly thereafter and allowed Shaffer back up to push the score to 6-4. Munn scored a second takedown late in the period, tying the score at 6-6.

As the final few seconds of the match ticked down, Shaffer attempted to go over the top of Munn while the Grizzly Cub senior tried to hang on to an ankle.

Shaffer and Munn landed faced down on the mat as the horn sounded and Shaffer, having created enough separation from his opponent, was an awarded an escape, much to the delight of the South Putnam crowd and howls of derision from Franklin Community supporters.

Hendrickson said Munn was as stern a test as Shaffer had faced all season.

"He wrestled a senior from Franklin Community who wrestles Jacob Stevenson every day and that kid was gunning for Kyle," Hendrickson said. "I think Munn gave him everything he had and it took everything Kyle had to beat him.

"He persevered. There's two minutes in every period and Kyle wrestled every last second to get the last point."

In the final, Shaffer met Avon's Elmore for the third time in as many weeks, looking for a third-straight win over his Oriole rival.

After a scoreless first period, Elmore chose bottom position to start the second period and scored a reverse on Shaffer.

Shaffer escaped in the second period and to start the third period, leveling the scores at 2-2.

The South Putnam grappler then did what Elmore could not on Saturday, hitting a takedown midway through the period to take a 4-2 lead.

Elmore escaped and looked for a winning move of his own but, much like the dual meet and sectional match-up before, failed to unlock Shaffer's defense in the closing seconds and settled for second again.

Hendrickson was pleased with the result and pointed to the final period as the place where Shaffer shone brightest.

"I couldn't be more proud of the way Kyle wrestled that match today," Hendrickson said. "The last two times he's met Elmore, I didn't feel he wrestled his best match in the third period.

The ramifications of the win were not known until the semi-state seeding list came out and results came in from the other regionals feeding into the Evansville semi-state.

Shaffer was drawn with Columbus East junior Coy Park in the opening round. A win would then see Shaffer face the winner of the match between Northview's Marcus Duregger and Mt. Vernon (Posey) junior Tyler Dekemper for a state finals birth.

Hendrickson said Shaffer would need a good week of practice as he was no longer an unknown in the semi-state and that all comers would be looking to hang a first loss on the sophomore.

"He's starting to realize that he's not the underdog anymore, he's the top dog," Hendrickson pointed out. "People are giving him their best shot and he knows he's going to have to work his tail off this week in practice in order to prepare."

Next Meet: Kyle Shaffer (36-0) competes in the IHSAA Evansville Semi-State at the Ford Center, facing Coy Park of Columbus East (23-12) in the first round next Saturday.