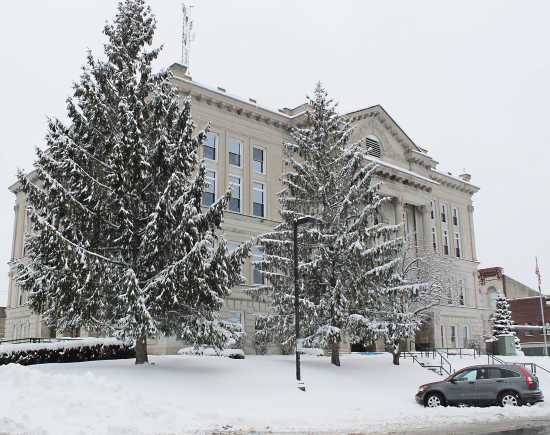 The Putnam County Courthouse in accumulates snow as more than six inches fell on Greencastle and Putnam County this weekend. (Photo by JARED JERNAGAN)

Sunday may have been March 1 but it seemed more like April Fool's Day as Putnam County residents awakened to six or more inches of new-fallen snow.

Snow began falling about 6:30 p.m. Saturday and seemed to be tapering off with about two inches on the ground at midnight.

However, as March 1 -- the first day of meteorological spring (on the calendar spring begins March 20) -- dawned, Old Man Winter kept his grip on West Central Indiana, dumping an additional five inches of snow or more on the area by the time the storm abated about 2 p.m. Sunday.

The unofficial local total provided to the Banner Graphic Sunday was 7.4 inches of snow from a reporting station just southeast of Greencastle.

The heaviest precipitation seemed to fall in a band between Williamsport, Frankfort and Kokomo where nine inches of snow was reported.

The surprise March 1 snow produced at least one record, making for the snowiest first day of March on record with five inches of snow credited after midnight.

Sunday's snowstorm also made for the snowiest March day in nearly 15 years, or at least since 8.6 inches of white stuff fell on March 11, 2000.

So how out of character was the March snow?

According to the National Weather Service, the average central Indiana snowfall for the entire month of March is 2.6 inches. That figure was surpassed by dawn Sunday.

Meanwhile, the two inches of snow that fell before midnight capped a late surge in February 2015 snowfall that set the monthly local total at 13.8 inches, 11 of which have fallen since Feb. 16 -- the same day the local ice cream stand -- Dairy Castle -- opened for 2015.

The recent snow kept troopers from the Putnamville Post busy as from 6 p.m. Saturday until 4 p.m. Sunday, ISP responded to 11 property-damage accidents in the district, along with one personal-injury mishap and 19 slide-offs. Troopers also assisted nine stranded motorists.

Treacherous traveling was evident across the state as Indiana State Police reported that statewide from 7 p.m. Saturday through 3 p.m. Sunday troopers responded to more than 600 incidents. Those included working 224 property-damage and 45 personal-injury accidents in addition to responding to 237 vehicles that slid off the road with an additional 137 responses to assist motorists with traffic and/or weather-related problems.

Meanwhile, Hoosiers are being advised to be vigilant as the potential for rain moves into the state. Rain can saturate snow, making already significant accumulations even heavier.

Wet snow can tax structures, especially roofs that are flat or with only a slight pitch, especially if they are next to taller, steeply pitched areas, allowing snow to slide and collect.

Signs that a roof could be under stress are severely bent rafters or cracking and popping sounds. Another sign of an issue could be jammed doors at the front or back of the home. Another concern, is if temperatures warm quickly, or warm weather is accompanied by large amounts of rainfall, the potential for flooding could be high. Flooding conditions can develop quickly. Some of the significant floods to strike Indiana have occurred during late February and early March. Additionally, consider clearing nearby storm drains. Warming temperatures across the state and the potential for rain in some areas can accelerate snowmelt. Cleared drains help water move away from properties, lessening the potential for flooding in urban areas.