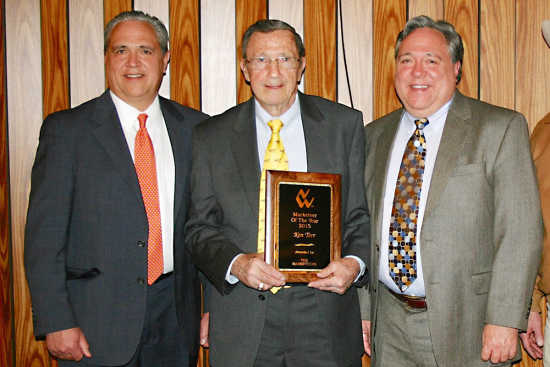 DENVER -- With a long and varied career in the livestock, Ken Torr is well-known in his chosen industry, both locally and regionally.

But Torr's impact beyond the confines of Putnam County or even central Indiana was evident on Saturday, Jan. 17 at the National West Club, as he was one of three hall of fame honorees at the 2015 Livestock Marketeers banquet.

Torr, of Greencastle, was honored along with Craig Conover of Mapleton, Iowa. Ed Meacham of Norman, Okla. was honored posthumously.

They called their organization The Livestock Marketeers.

The goal was to encourage new and young members of the industry to succeed in their chosen profession, and they established a Hall of Fame to recognize outstanding individuals at an annual banquet, held in conjunction with the National Western Stock Show in Denver.

After purchasing his first Angus heifer at 13 years of age in 1948, Torr started his auction career in 1952 and never looked back.

Torr is the sixth generation to live on the home farm in Greencastle. He graduated from Purdue University, where he worked at the beef barn and was a member of the 1955 dairy and 1956 livestock judging teams.

Joining the staff of the First Citizens Bank as a farm representative, he worked his way up to assistant trust officer and earned a real estate broker's license.

Returning to his roots, Torr left the bank in March 1963 to go to work as a livestock fieldman for The Indiana Farmer, which sold to Prairie Farmer later that same year. He wrote the first livestock display ad for that magazine.

The publication's growth eventually caused them to add 1993 Hall of Fame honoree Lyle Eiten to work the west side of the Indiana/Illinois line, with Torr claiming the eastern territory. They shared livestock display advertising responsibilities for 17 years, before Lyle's retirement. His son, Don Eiten, came on board at that time. 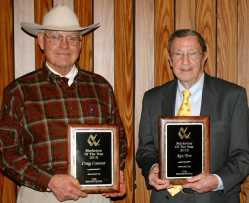 Torr attended Superior Auction School in Decatur, Ill. He trained with legendary auctioneers like Ham James, Paul Good, Ike Hamilton and Ray Sims, and continued auctioneering sales for 40 years. He passed on that knowledge for decades, training the next generation of marketeers.

The Ken Torr Classic golf tournament was a highlight of the summer season for many livestock professionals, paving the way for other industry competitions that take place away from the barn and out on the green.

He also bred and raced Standardbred horses for 35 years, rebuilt his Angus cow herd, continued his lifelong work in photography, and developed a woodworking hobby that is housed in a two-story shop known as "Ken's Workshop & This 'N That Museum." The facility is home to his woodshop, as well as a collection of photos and memorabilia from his extensive career. Featured photographs include nearly 800 framed pictures of old barns, all from within Putnam County.

"This is one tough cowboy," said Jay Carlson of BEEF magazine, as he listed all the reasons why Ken is an outstanding addition to the Livestock Marketeers Hall of Fame. "Congratulations, you've earned this honor."

"There's no greater gentleman in this business that I have had the opportunity to learn from and work for than Ken Torr," said Kent Jaecke of Focus Marketing Group.

Torr accepted his award in Denver, thanking the Marketeers for the honor and noting that he worked with 66 of the 112 members of the Hall of Fame.

"This is a people business," Torr said. "It's a unique set of people; we're all competitors, but we share a great camaraderie. I never met an auctioneer I didn't like! I love livestock, and I love the people in the livestock industry. I had a ball, it was a fun trip."

Ken married Beverly Huller in 1956; they have twin sons, John A. and Gerald R. Torr, as well as a daughter, Janet.

Master of ceremonies for the banquet was J. Neil Orth, executive vice president of the American-International Charolais Association and a 1984 Hall of Fame inductee. The event is hosted by American Live Stock.