Described as a "cello goddess," by The New Yorker, with "the kind of magnetic panache usually reserved for rock stars," according to New York Magazine, Maya Beiser gives the cello a modern makeover for the next Green Guest Artist Concert, at DePauw University adding a band, amplification, audio and video looping, and original footage by one of America's most adventurous filmmakers, Bill Morrison.

The performance takes place this Saturday night at 7:30 p.m. in Kresge Auditorium at the Green Center for the Performing Arts.

The program puts a classical spin on classic rock "uncovers," as the artist describes them, by Led Zeppelin, Nirvana, Janis Joplin, Howlin' Wolf, Pink Floyd and AC/DC with the intent of revealing the core of each song as a musical masterpiece. 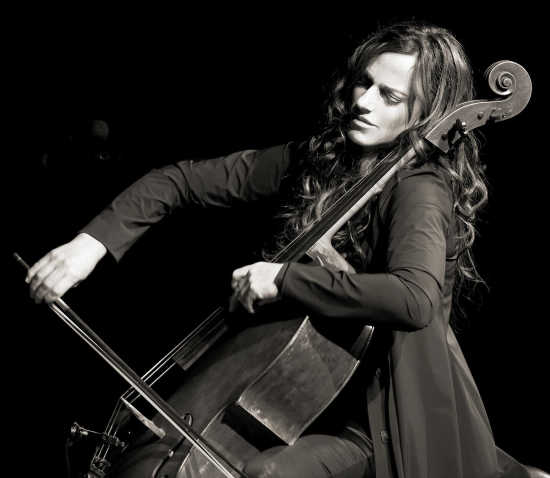 "Uncovered," Beiser's latest CD, is getting impressive reviews, while she and her band are wowing live audiences with their musical resourcefulness, multi-media and visual effects.

In the opinion of senior music student Federico Papi, a cellist with the DePauw University Orchestra, Saturday's concert will be one of "the coolest and most exciting happenings of the year."

"I've been watching Maya Beiser's videos on YouTube," Papi said, "and I would never have thought the cello could actually be that cool. Her show is awesome with tons of energy, rock covers, and video art and innovations that she uses in very engaging ways.

"Beiser combines the mastery of a classical musician, with technologies typically identified with guitar -- like the looping and effect pedal -- on what's been perceived for hundreds of years as a classical acoustic instrument, and really makes it crunch."

Raised on a kibbutz in the Galilee Mountains in Israel by her French mother and Argentinean father, Beiser is a graduate of Yale University. She is also the founding cellist of the new music ensemble, the Bang on a Can All-Stars.

Throughout her adventurous career, the artist has actively worked to re-imagine the classical concert experience, creating new music for her instrument, and performing and commissioning works written specifically for her by today's leading composers.

Beiser, who will be joined Saturday by bass player Ryan Brown and drummer Colin Campbell, has collaborated with composers Brian Eno, Philip Glass and Steve Reich, among many others. As a featured performer on the world's most prestigious stages, she has appeared as a soloist at New York's Lincoln Center and Carnegie Hall, Brooklyn Academy of Music's Next Wave Festival, London's Royal Albert Hall, the Sydney Opera House and the World Expo in Nagoya, Japan.

In 2011, she was invited to give an exclusive TEDtalk performance, which has been watched by close to a million people and translated to 32 languages.

Maya's discography, released on Sony Classical, Nonesuch, Koch (now E1), Innova and Cantaloupe labels, includes eight solo albums and many studio recordings and film music collaborations. Her 2010 album "Provenance" topped the classical and world music charts on both Amazon and iTunes, and her 2012 recording, "Time Loops," was selected among NPR's top 10 recordings of that year.

Beiser's album "Uncovered" -- her collection of re-contextualized rock classics in new arrangements by composer Evan Ziporyn -- was in the top 10 on the Billboard Classical Chart upon its release in August 2014. The San Francisco Chronicle raved, "With this electrifying disc, the avant-garde cello virtuoso Maya Beiser transforms herself into something of a rock 'n' roll diva."

General admission to Green Guest Artist Concerts is $10 in advance and $15 the day of the event. Tickets for seniors, youth and all students, are free thanks to season sponsors Judson and Joyce Green.

Get tickets by visiting www.depauw.edu/music/tickets or the GCPA box office at 605 S. College Ave. (Monday through Friday 12--4 and 6--8 p.m., Sunday noon--8 p.m., and one hour prior to performances).