There's a new sheriff in town, and Thursday afternoon he shared his goals and observations with local business leaders.

The department goal, now established in the form of a mission statement and inscribed on a placard that will hang in the department's visitation area, is to "promote the most professional and courteous police service possible for the people of Putnam County." 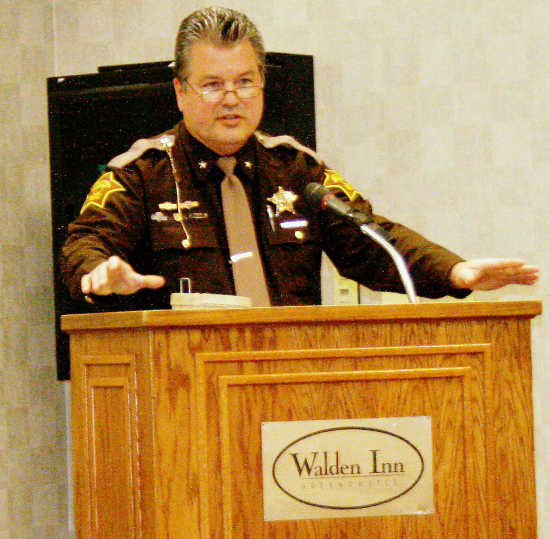 From a podium at the Inn at DePauw Thursday, Putnam County Sheriff Scott Stockton addresses the quarterly luncheon of the Greater Greencastle Chamber of Commerce.

"We're not going to turn back the clock and be critical of anybody," Stockton assured, noting that he, Chief Deputy Phil Parker and legal counsel Todd Smith have gone through the SOP (standard operating procedure) manual and revamped much of it.

While admittedly that amounts to "words on paper," the sheriff is quick to add, "but as police officers we take a solemn vow to serve the public the best we can."

Without a mission statement and no direction or guidance, it's easy to "get off-course," he suggested.

"I think the trust has been damaged in Putnam County, and that's why I ran (for sheriff)."

A number of changes in how the deputies go about their jobs have already been established.

The public may have noticed that despite the harsh February weather Putnam County just endured, you haven't seen sheriff's cars idling outside restaurants or gas stations or anywhere else (unless it is a K-9 unit).

"If anyone sees one," Stockton offered, "feel free to call us or take a picture and email or text it (to the department)."

In other words, there's no more of officers going into a restaurant for an hour and leaving a gas-guzzling Sheriff's Department Tahoe idling out front.

"I can venture to say that has stopped," the sheriff told the 30 luncheon guests.

He also told the group the department has cut the police package on its commissions (squad cars) by 40 percent, saving about $4,000.

"It's still about assuring officers' safety," he said, "but too much is too much."

It also means no remote starters on the sheriff's cars, no floor mats or air fresheners to be bought and paid for by taxpayers.

"I'll buy them (his deputies) a can of Lysol if they need it," Stockton smiled as the audience chuckled.

And such policies are in effect for everyone, from the newest deputy on the road to the top dog.

Until about four weeks ago, Stockton said the only amenities he needed in his commission were a place to keep his coffee warm and somewhere to light his cigar.

But the new policy, forged by Chief Deputy Parker, has changed all that.

"That goes for the sheriff, too," Stockton said he was told.

"I'm never going to violate that policy because one, Phil might see me, and two, it's just not a good example to be setting," he smiled.

Stockton said by re-evaluating policies and expenditures, he's also found a way to save $2,000 on the alarm system in place at the pistol range by changing how it has been set up through Frontier.

"I'm not being critical by any stretch of the imagination," he said. "These are just things I've seen that need to be changed."

The sheriff added that the department is formulating a citizen complaint and internal investigation procedure as well, which is expected to be similar to the Indiana State Police policies with which Chief Deputy Parker and Stockton are quite familiar after their lengthy ISP careers.

The intent is twofold, the sheriff noted.

"It solidifies the integrity of the agency and protects the officer from false accusations," he said, adding "this department has suffered enough."

Deputies and department staff will also be held accountable via a formal evaluation system yet to be instituted, Stockton said.

When begun, it will establish goals and provide for evaluations where none previously existed, the new sheriff said.

"Subordinate personnel need to have direction," he said simply.

Stockton was elected sheriff last November and began his four-year term Jan. 1. He pledged to work with State Police and Greencastle City Police and other emergency authorities for the good of the public.

"It's not a competition to see who gets the most arrests or who stops the most drunk drivers," he assured. "It's about doing your best to serve the people of Putnam County."