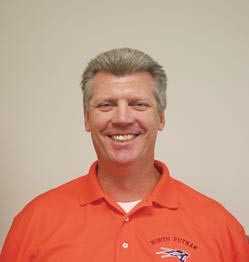 John Danaher has been the North Putnam AD for three years. (Courtesy Photo)

ROACHDALE--North Putnam will be looking for a new athletic director and two new basketball coaches.

The school board voted not to renew the basketball coaches' contracts at the March meeting.

"It occurred to me that it's probably time to move on," John Danaher said. "My wife and I decided that we would look for something else. I want to stay in athletic administration. I love doing it. It's been a part of my life for a long time."

Danaher was hired in October of 2012 and while he has no immediate plans he is optimistic about the future. He has more than 10 years of teaching experience and 10 years of AD experience having previously worked as a teacher and AD of the Niles school district in Niles, Mich.

"We're actively looking right now and we'll let the chips fall where they may," Danaher said. "I can always go back to the classroom but again I'd like to stay in athletic administration."

Danaher will finish the spring semester and that will give the North Putnam administration time to look for a replacement. North Putnam Superintendent Dan Noel was unavailable for comment.

In his one-year stint at North Putnam, McCartt went 3-19 on the season.

Spencer went 5-17 in this stint as girls' coach.