No break from education issues for Legislative Update 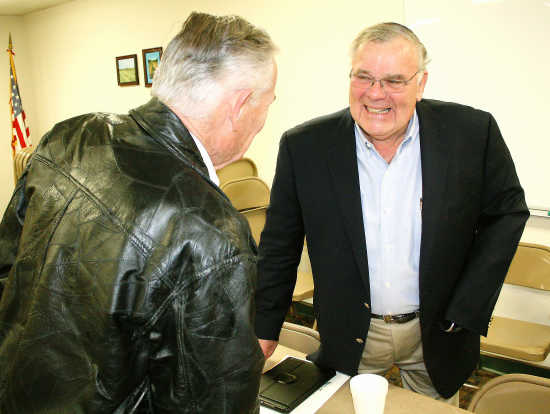 Putnam County schools may already have been on spring break Saturday morning but that didn't stop education from again dominating the discussion at the third and final 2015 Farm Bureau Legislative Update session in Greencastle.

A month after much of the discussion revolved around the composition of the State Board of Education and the well-publicized rift between State Superintendent of Education Glenda Ritz and Indiana Gov. Mike Pence, most of the 20 spectators at the Farm Bureau Insurance meeting room Saturday questioned District 44 State Rep. Jim Baird (R-Greencastle) about proposed education funding.

Information passed out by Rep. Baird notes that a $469 million chunk of Indiana's biennium budget (52 percent of total general fund appropriations) will go toward K-12 education in Fiscal Year 2016 and 2017.

"We're putting more money into education than ever before," Baird said, adding that in addition to the $469 million targeted for K-12 education, House Bill 1001 (the budget bill) includes grants for innovative teachers as well as a $200 tax credit designed to reimburse the many teachers who purchase classroom supplies out of their own pockets.

"The whole goal in all of this," Baird said, "continues to be to try to make our kids competitive in the world market."

While that is admirable, audience member Kim Fidler, who has served as a lobbyist for the Indiana State Teachers Association (ISTA) during the 2015 Indiana General Assembly, questioned how much of that education money goes to "traditional schools."

Fidler told Rep. Baird the Legislature needs to "dig deeper" to aid public schools, many of which are scheduled to lose hundreds of thousands of dollars under a new school funding calculation based on the number of students (or a corporation's ADM, average daily membership).

Under the new calculation, or the so-called complexity index, students qualifying for free or reduced lunches are being handled differently with the state only giving schools funding (above the foundation level) for free-lunch students.

That is going to hurt corporations like the four county schools, several educators noted.

Under what is proposed in the Legislature, Cloverdale would lose $500,000 from an expected $8.5 million budget in 2016, CCSC Supt. Greg Linton said.

"That's not a lot of meat left on the bone," Linton said Saturday.

"With about $469 million coming back to education," he said, "a third of the schools have to lose money. It would be nice to at least break even or everyone get a piece of it (unless the corporation is losing students)."

Greencastle is expected to lose $300,000 in funding under the revision, and North Putnam will see a loss similar to Greencastle and Cloverdale, while South Putnam is poised to about break even, preliminary figures indicate.

"We're not going to be hurting like the other three school corporations," South Putnam School Board member and Legislative Update moderator Steve Cash of Farm Bureau noted Saturday. "Our numbers don't change much."

Pride stressed that the funding of charter schools or vouchers ought to be the responsibility of those persons choosing to do that for their child's education.

"As a taxpayer," he said, "my responsibility is to pay for public education."

Pride, in addition to Fidler and others, would like to see a line item in the budget to delineate how much funding is going to charter schools and vouchers.

"At least then that doesn't pull money out of the Putnam County schools to go to vouchers and charter schools," he added.

"As I've always told my teachers, 'there's only one pie and you can only slice it so many ways.' The more you slice that pie, the less money is coming back to the schools."

"You can't make that up buying less rubber bands or manila folders," Pride assured. "Those are staff cuts."

And that translates into potentially losing programs and valuable instruction.

"We may have to cut programs," Rep. Baird agreed, "and that's a concern to somebody like me."

Baird, the lone legislator attending Saturday's update program with State Sens. Pete Miller and Rod Bray out of town, said the haggling over the budget and the process in general perturbs him.

"We've got 1,069,000 children (being served by the state education system) out there and we're arguing about who ought to be the chairman of the State Board of Education," the Greencastle Republican said.

"I think there's been this attitude we're trying to destroy public schools," the two-term state representative said. "That never was the case. I came up through the public schools."

Baird was asked where the Ritz-Pence spat stands now, just beyond the midpoint of the 2015 Legislative session.

"It is what it is," Baird responded.

"I'm just concerned about where we're putting our emphasis," he said later.

Retired educator Pride urged everyone to put politics aside and "do what's best for the kids."

"The animosity I detect out there," Pride added, "is just out of this world."

"It has an impact on our state and our country and how we're perceived around the world," he said.

Pride then summed up the day's dialogue.