Cloverdale to shore up mistakes before county 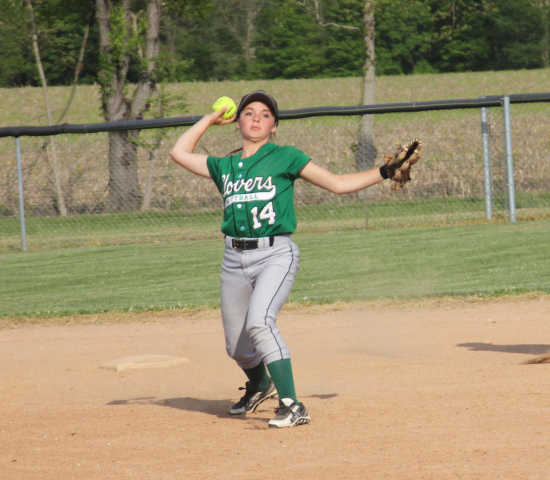 CLOVERDALE -- Some early runs in the game forced the Clover softball team to make some pressure hits. Cloverdale filled the bill and wound up winning big over White River Valley 12-4.

"We are doing a good job of hitting the ball right now," CHS coach Jim Spencer said. "We did some good things offensively and we made good plays defensively."

During the first innings a few miscues allowed the Lady Wolverines to get on base and score.

White River Valley scored two runs with its first two batters due to two doubles and then two sacrifice flys.

Cloverdale then gave up two doubles in each the second and third inning to fall behind 4-3.

Pitcher Lauren Meek recorded two strikeouts but after the Wolverine score in the fourth her pitching led to a number of popups and ground-outs.

The second half of the game was all about Cloverdale.

In the fourth inning the Clovers went through their entire lineup, scoring seven runs. Many of the CHS batters walked to first, however Jessica Winders earned two RBIs in the innings and Shedron earned one.

Spencer said his team needs to begin to put full games together as the county tournament draws near and limit mistakes that require big innings.

"This time of year you have to start reducing mistakes that you make on offense," Spencer said. "In the last week ours have gone up. So we've got to keep doing things well that we're doing well and start correcting some of the things that are getting away from us."

After the crucial fourth inning tear, Cloverdale stayed poised in the field. Defensive plays were made all over the field, including a grand over-the-shoulder catch in left field by Skylar Price and a snag by Kimmy Winders, who bounced back after injury to her ankle at bat.

Dinah Bunch scored her second run of the night in the fifth inning and scored again after a single in the sixth to help score Lauren Meek.

The final inning came to a close when a ball was hit to right field and another tough grab was made by Christa Asbury who twisted her body just to make the catch and end the game.

CHS softball will next travel to the Owen Valley Invite on Saturday. Afterward the Clovers will have three games before the county tournament.