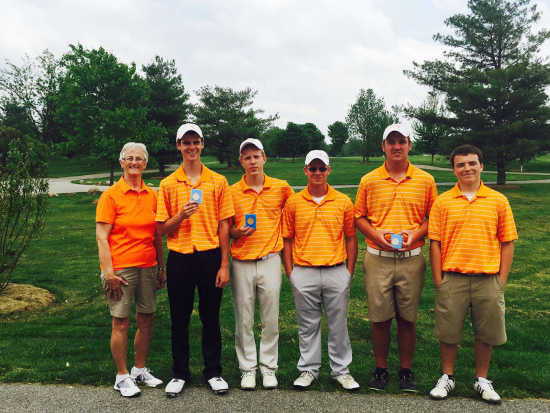 South Putnam came in after Cascade with 431.

North Putnam's Austin Judy and Jake Buis of Greencastle were the low men for Putnam County at 80.

Freddy Fislar earned first-place for Cloverdale with 85 and Tyler Hicks was tops for South Putnam with 96.

"With the dissolution of the WCC at the end of the year, it was the last opportunity for several senior members to earn this title for their four years of hard work and dedication to the NPHS golf program," Cougar coach Linda Patrick said. "But it took all five players to win the trophy. This was the kind of day when a coach only hopes for all players to be playing their best at the same time."

North Putnam had three players earn the All-Conference team including Judy, Jake Holtze and Danny Smith. Patrick was complimentary of all of her golfers for each had contributed to the team's success while improving their own games.

"The perseverance of Emmett Holsapple to drop his back nine score by seven strokes; the steady consistent play of Preston Porter bringing in the final card," Patrick said. "The ever methodical play of Jake Holtze, with nothing ever seeming to bother him; the quiet by very golf savvy play of Danny Smith; and the persistent, deliberate play of Austin Judy, all combined forces at the conference to meet one of their major goals for the season.

"This was a meet dealing with more of the here, rather than the scores, that brought forth the fruition of winning the WCC," Patrick added.

Apart from Buis' 80 which tied Judy for Putnam County's best score, Carl Basile score of 84 landed him on the All-Conference team along with Buis.

The collective low scoring of all the Tiger Cubs helped earn its second--place finish and should provide coach Steve Paquin with some confidence regarding the upcoming Putnam County Tourney.

Paquin believes that despite Cloverdale's advantage of playing on its home course during county the results could be up in the air.

"It's a wide open tourney, but the home team has the advantage," Paquin said. "Any team could win this year. We've beaten every team and they've beaten us with the exception of South Putnam who we've only played once."

CHS's Freddy Fislar's score of 85 earned him an All-Conference ticket with his teammate Rylan Mattocks just missing the bill with a score of 86.

"I was pleased by Freddy Fislar and his persistence," Clover coach Doug Wokoun said. "He battled setback after setback to post a good score. Rylan was not quite as successful as Freddy, but was only one stroke behind. The two seniors have led us all year and gave us all they had, in spite of not having their best rounds."

While his other players saw some tough outing, Wokoun remained confident in the of his Clovers.

"Kylar also played pretty well, and I know he worked very hard," he said. "Chase is starting to put some things together, but had a couple of rough patches he just couldn't overcome. Zach had a tough start, played well for a stretch, and then ran into some trouble he could not overcome."

South Putnam's coach Kevin Metz, while disappointed with of the high scores, expressed confidence in his young team's work ethic and optimism for future years.