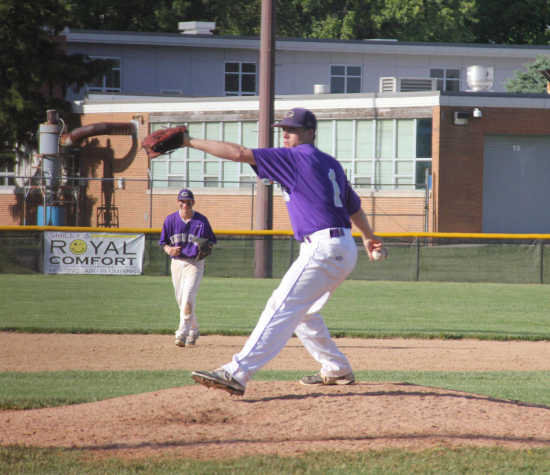 Tanner Nicholson of Greencastle pitches at home against Cloverdale. On Tuesday Nicholson broke the GHS triples record with six on the season. (Banner Graphic/JAY LOCKETT)
Order this photo

The Greencastle baseball team needed both wins against Cloverdale to earn a tie with Cascade for the final WCC title and Greencastle fit the bill.

After finishing the game it started Monday with the Clovers and winning 9-6, Greencastle earned a second win on Tuesday 15-5.

"Brantson (Scott) pitched well in game one," CHS coach Jarrod Duff said. "We had costly errors defensively. We hit the ball much better than we did on Saturday. When we continued the game and had the bases loaded with no outs in the bottom of the seventh, I liked our chances. Unfortunately, we weren't able to get timely hits to finish off the comeback."

While the Tiger Cubs enjoyed success as a team, pitcher Tanner Nicholson earned his sixth triple of the year placing him No. 1 in the GHS record books in front of Ryan Battin.

"When I hit that ball it felt great," Nicholson said. "I knew Ryan Battin who held the record last. He was a great guy. I knew I was getting to third. I wasn't stopping."

The game started with a flurry of Tiger Cub scoring as Greencastle scored eight runs in the first two innings. An RBI was earned by Anthony Rossok, two from Nicholson and three from Trey Scanland.

GHS coach TroyRemsburg said he thought his team was beginning to hit the ball at the right time in the season with the sectional matchups nearing.

Cloverdale however had a good start to the game as well.

Duke Duff, Brayden White and Scott all managed a score in the first inning thanks to wild pitching and an RBI from Scott.

Josiah Watson's single in the second inning was rewarded when White put up a sacrifice fly allowing Watson to score. Scott then earned another RBI after Duke Duff's single.

However with the score still close that was the last run Cloverdale could manage.

"For the most part this team doesn't give up," Remsburg said. "We've had some difficult games but and there was some tension. But they've come together."

After going scoreless through the third and the fourth inning, the Tiger Cubs got the bats going again with RBIs for Noah Cook and Scanland in the four-run fifth.

Levi Lewis earned a run in the sixth inning following his run in the fifth, this time his score came via the record-breaking triple by Nicholson, who also scored Cook. Scanland scored Nicholson to end the game in six innings.

"Of course we would've liked to have won (the WCC) outright but we'll take it," Remsburg said. "It's not going to say tied with Cascade. It'll say we won conference."

With the win, Greencastle has a Putnam County Championship game against North Putnam on Thursday before its final game at Northview on Friday. GHS then will play Indian Creek at Danville next Wednesday May, 27.

Cloverdale will play Monroivia in the North Putnam sectional on Thursday.

"We are looking forward to the challenge of playing Monrovia in the first round of sectional next week," Jarrod Duff said. "We split with them earlier in the year. It should be a competitive game."

North Putnam will play Cascade on the Cougar home field on Wednesday May, 27 with the winner of that game playing South Putnam.