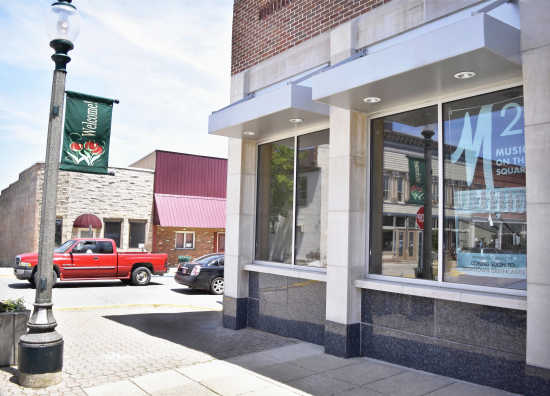 The former Goodwill Store at the corner of Indiana and Franklin streets on the east side of the Courthouse Square has been converted into the new DePauw University Music on the Square venue.

A new music resource and performance space in the downtown square that is designed to enhance the ongoing partnership between Greencastle and the DePauw University School of Music will be officially opened at a ribbon-cutting ceremony on Monday, June 8.

The venue, to be known as Music on the Square, is made possible by DePauw alumni Judson C. Green and Joyce Taglauer Green (DPU Classes of 1974 and 1975, respectively) whose gift launched the School of Music's 21CM (21st Century Musician) program, a multi-faceted initiative with the goal to create an abundance of opportunities, educational resources and connections for today's entrepreneurial musician.

The Greens will visit Greencastle for the June 8 event. Internationally renowned cellist Yo-Yo Ma, honorary chairman of the newly formed 21CM board and the Judson and Joyce Green Creative Consultant for the Chicago Symphony Orchestra, will also attend the ribbon-cutting.

Others participating in the ceremony will be Greencastle Mayor Sue Murray; DePauw President Brian W. Casey; Dean of the School of Music Mark McCoy and Mark Rabideau, whose appointment as the director of the 21CM initiative and Community Music Program will officially begin July 1.

The return visit of Yo-Yo Ma to DePauw, where he spent a two-day residency at the School of Music in September 2011, will also include a two-day meeting of the 21CM board. It will coincide with the inaugural Silk Road Ensemble Global Musician Workshop, which is taking place on the DePauw campus June 8-12. 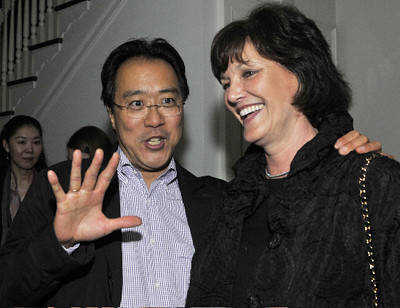 Yo-Yo Ma, who is returning to the DePauw campus in June and will be on hand for a ribbon-cutting on the new Music on the Square venue June 8, speaks with Joyce Green during a 2011 visit.

The School of Music purchased the building formerly occupied by Goodwill Industries (and a one-time A & P store) in the fall of 2014 and renovations are continuing. Music on the Square is equipped with four sound-isolating and acoustically tunable Wenger practice rooms. Once completed, its amenities will include a classroom, a flexible performance space with comfortable seating, and a catering kitchen, creating capability for a wide variety of multidisciplinary events and performances with capacity for 100 people to gather.

Music on the Square is the most recent example of the ongoing partnership between the School of Music and Greencastle, launched in fall 2012 and built upon the belief that music and the arts strengthen the fabric of the shared community. It is hoped that bringing music and educational services downtown will provide greater access to a wider audience and foster the connection between DePauw and Greencastle residents.

"As the School of Music reimagines preparing 21st-century musicians, we hold the belief that the transformative powers of the arts must be made accessible to all of our children, especially those at the margins," says Rabideau, whose initial priorities include increasing the program's scholarship capacity.

With a goal of providing audiences a deeper insight into music makers and the art of music making, Rabideau also plans to create a variety of Communiversity courses that will unfold over multiple weeks, culminating in live performances and conversations with the artists in the intimate setting at Music on the Square. Announcements about Communiversity course offerings will be made at a later date on the "Music on the Square" webpage, www.depauw.edu/music/m2.

The new downtown space will also have an on-site box office to provide patrons with a convenient off-campus location for purchasing tickets to the diverse array of concerts and events hosted at DePauw's Green Center for the Performing Arts.

For additional information on Music on the Square, the Community Music Program and Communiversity, contact the DePauw University School of Music at schoolofmusic@depauw.edu.