A Putnam County native has won the James D. Pitzer Award as Indiana Conservation Officer of the Year.

Conservation Officers gathered at the State Capitol building Thursday to honor officers from across the state for their accomplishments of the past year. 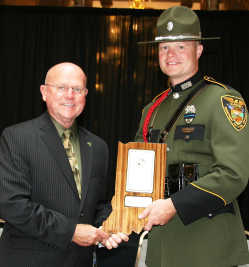 Officer Greg Swanson was awarded the James D. Pitzer Award, which is the highest award an Indiana Conservation Officer can receive.

The honor was named after Indiana Conservation Officer James D. Pitzer who was shot and killed in the line of duty.

Each district annually selects an "Officer of the Year" by vote by their peers. The IDNR Law Enforcement Division consists of 10 districts statewide plus the Investigation Section.

In January, Swanson was chosen as District 5 Officer of the year, which made him eligible for the Pitzer Award.

Each officer nominated at the district level was considered for the honor, and the director of the IDNR Law Enforcement Division, Danny East, made the final decision on the Pitzer recipient.

Swanson, who graduated from South Putnam High School in 1995, grew up outside of Putnamville.

He realized at a young age that a career as a Conservation Officer was the direction he wanted to take with his life. To help achieve that goal, he enlisted in the National Guard at 17 and attended Vincennes University, where he earned an Associates Degree in conservation law.

Swanson graduated the ICO recruit school in 1998 and was assigned to Greene County, which is where he and his family live today.

A member of the ICO Dive Team, he serves as a defensive tactics/use of force instructor. As a result, he often is called upon to instruct defensive tactics for other local agencies, as well as basic course students at the ILEA. In addition, Swanson served as a drill instructor in 2006, 2009 and 2014, providing recruits with essential training and skills to become successful in their future careers.

He was selected as a senior drill instructor for the upcoming 2015 training program. In April 2014, Swanson's peers voted him Peer Support Officer for District 5, which means officers believe he would be the most trustworthy, understanding and helpful person to turn to during time of need.

The most serious incident occurred May 21, 2012 when the armored truck in which he was riding was attacked. The driver was killed, and all four passengers were injured. Swanson sustained shrapnel wounds, and as a result received the Purple Heart.

Later, in a display of selflessness, he gave his medal to the family of a World War II veteran who was also injured during combat, but was never presented the much-deserved medal.

"Greg Swanson is the epitome of the officer we all aspire to be," DNR Law Enforcement Division Director East praised. "The level of dedication, passion and commitment Greg possesses toward his profession is invaluable. Thank you, Greg, for your service and dedication to your family and friends, this division and most importantly, to your country."