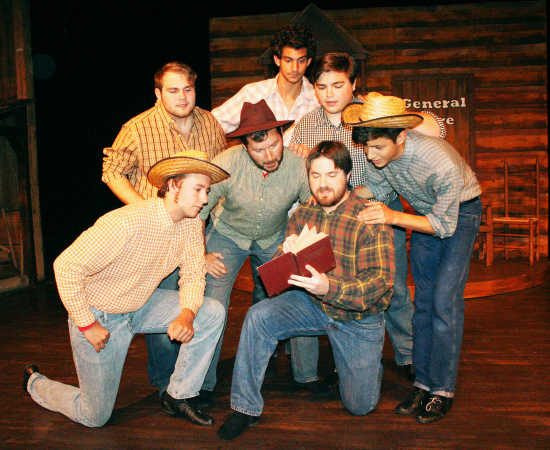 Seven brothers, looking for seven brides to court, resort to some titillating text to help guide them in a scene from the Putnam County Playhouse production of the musical "Seven Brides for Brothers." Dustin Bond reads from the book as his brothers (from left) Jake Glidden, Jacob Riggen, TJ Tincher, Abe Anglin, Cameron Callan and Alexander Briones look on. The musical opens Thursday with an 8 p.m. performance at the Hazel Day Longden Theatre in Greencastle. Subsequent performances are slated Friday and Saturday as well as June 10-13. (Banner Graphic/ERIC BERNSEE)
Order this photo

The 54th season at Putnam County Playhouse will open this week with a production of "Seven Brides for Seven Brothers."

The musical will be presented Thursday, Friday and Saturday, June 4-6 and June 10-13. All performances begin at 8 p.m.

The musical is being sponsored by Floor Fashions Co./Carpet Plus-Color Tile.

The cast is led by Dustin Bond as Adam Pontipee and Meghan Armitage as Milly.

When Adam comes to town determined to get a wife, he chooses Milly and takes her back to his cabin where he lives with his six brothers, portrayed by TJ Tincher, Cameron Callan, Jake Glidden, Jake Riggen, Abe Anglin and Alexander Briones. Charlotte Lambermont makes her stage debut as Hannah Pontipee.

Shelly McFadden (who played one of the brides in the 1994 Playhouse production) is the director. Her staff includes Marilyn Burdsall Rush as musical director-pianist and Callan as vocal director. Assistant director is Katie Wallace.

Joining Rush in the pit will be Dede Schwomeyer on percussion and Pat Scott on keyboard. Rehearsal pianist is Ellen McCullough.

The brothers decide to go to town and get wives of their own. The prospective brides are played by Sarah Bond, Kayla Clodfelter, Clarissa McCullough, Ellissa McCullough, Michaela Semak and Samantha Flannelly. Of course, the current suitors of the girls take objection to the Pontipee brothers' intentions. Suitors include Jeremiah Lester, Ethan Gill, Logan Dotson, Levi Dotson, Alan Skillern and Lance Clodfelter.

When the girls are abducted by the Pontipees, the townspeople take action of their own. Playing townspeople are Ric McFadden (who played Adam in the 1994 production of the show), Wallace, Chet Clodfelter, Julie Collenbaugh, Andrew Ranck and Kaitlyn McCollough.

The Challenge Dance in which the brothers lure their intended brides from their suitors is a highlight of Act One.

Jessica Masner is the stage manager. Working on the crew are Rhonda Foote, Zoe Foote, Elise Merrell, Sarah Zehner and Sara Via. Spotlight operators are Brandon and Cameron Wunderlich.

"Seven Brides for Seven Brothers" is based on the film musical, which in turn was based on Stephen Vincent Benét's story "The Sobbin' Women." It has music by Gene de Paul and lyrics by Johnny Mercer. The book is by Lawrence Kasha and David Landay. Additional songs are by Al Kasha and Joel Hirschhorn.

The 2015 season at PCPH will continue with "The Bad Seed" in July, "Into the Woods" in August, and "The Game's Afoot" in September.