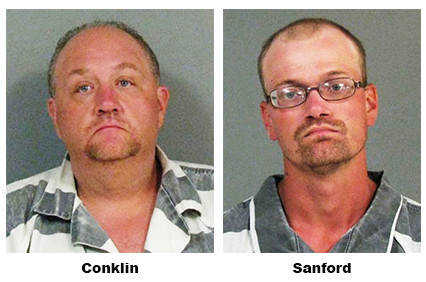 MAYVILLE, N.Y. -- A Jan. 12 trial date has been set for the two men charged with murder in the August 2014 shooting death of Mary E. Whitaker, a 61-year-old Greencastle native.

An accomplished musician who resided in New York City, Whitaker was killed during a robbery at her Westfield, N.Y., summer home.

Jonathan Conklin, 43, and Charles Sanford, 30, a pair of homeless men with last-known addresses in Erie, Pa., were indicted last September and arraigned earlier this year on second-degree felony murder charges in the case.

As of now, the two men are scheduled to be tried at the same time, which the Chautauqua County, N.Y., district attorney believes could extend the length of the trial.

"It's a combination of the complexity of the case and the court calendar," David Foley told Time Warner Cable News in Jamestown, N.Y. "I've never tried a case where I've had several defendants at once. Trying them both together at once obviously is more efficient, it's more convenient, we only have to produce witnesses once."

Local and federal authorities in New York and Pennsylvania arrested the pair last Aug. 22 after tracing phone calls and purchases made with Whitaker's cell phone and credit cards.

When Conklin used Whitaker's credit card at a Rite Aid drugstore in Erie, he was caught on video surveillance, authorities said.

Conklin, a homeless man with a violent criminal past, and Sanford, a registered sex offender, are accused of shooting and stabbing the world-class violinist after stealing a rifle from an apartment in town and walking to the rural area where Whitaker's home sits upon a hill.

Conklin "wanted to live like a rock star," according to an affidavit filed in support of the criminal charges. He reportedly said he needed money to buy drugs.

Sanford reportedly told authorities he knocked on Whitaker's door, said his car had run out of gas and he needed a phone.

Once she was lured outside, Conklin reportedly displayed the rifle and shot her after she screamed.

In a subsequent struggle for the rifle, Whitaker was shot again in the leg, falling and hitting her head on the garage door. She was then dragged into the attached garage, where Sanford stabbed her in the neck, police reports stated.

Sanford's attorney may ask the court to separate the two cases since his client allegedly did not pull the trigger.

"We're still evaluating facts and determining what happened here because there are conflicting stories between the two defendants," attorney Jason Schmidt said.

Conklin's attorney may also ask the court to separate the cases, and will not comment on whether his client fired the gun.

In addition to their state charges in Mayville, both Conklin and Sanford also face federal charges including carjacking and committing a crime with the use of a firearm. No trial date has been set in the federal case.

U.S. Attorney William J. Hochul has said the suspects face federal prison sentences from 10 years up to life in prison if convicted of the federal crimes. Hochul earlier said his office "will do everything in our power to make sure neither of these two men ever again walk free."

A 1971 Greencastle High School graduate, Mary Elizabeth Whitaker was the daughter of the late John and Frances Whitaker, who owned and operated Whitaker Funeral Home (now Bittles and Hurt) in Greencastle throughout much of the 1950s, '60s and '70s.

After graduating from Indiana University with a performance degree in violin, she moved to New York City. Over the past 30 years she was associated with major free-lance orchestras in New York, toured regularly and was part of Barbra Streisand's 2006-07 international tour.

A member of the Westchester Philharmonic for 25 years, she played regularly for Broadway shows like "The Lion King" and spent summer months performing with the Chautauqua Symphony.