By Kyle Hollinger For the Banner Graphic 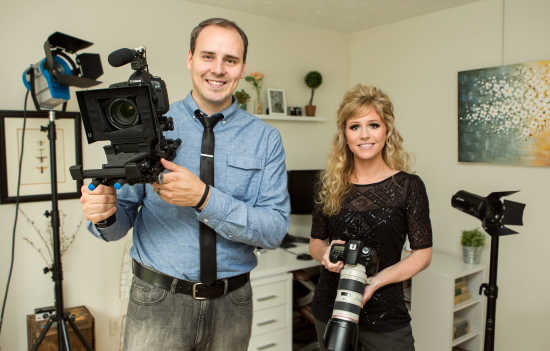 Jet and Dani Kaiser pose in their basement studio where the couple run dual production houses: Lightspan Studios to cover commercial work and Jet Kaiser Films to produce high-end wedding videos and photography. The work done through Lightspan for the Indianapolis Monumental Marathon has been nominated for two Emmy Awards. (Banner Graphic/Kyle Hollinger)

Greencastle natives Jet and Dani Kaiser would love to go to the 2015 Regional Emmy Awards, especially because one of their video production companies, Lightspan Studios, has been nominated for two awards, but they're just too busy working.

"Unfortunately we can't go because we're shooting on the East Coast that day," Jet said chuckling.

"That's just how it goes sometimes."

Jet founded Jet Kaiser Films nearly a decade ago while he and Dani co-founded Lightspan Studios in 2012.

The working couple focuses on high-end, vacation wedding videos with the former company while performing commercial work with the latter.

Their recent project for the Indianapolis Monumental Marathon, titled "Because I Can," is the project which has garnered the dual nominations.

Lightspan Studios has worked with the marathon, the largest in the state, since 2012 although their Emmy nods are related to video work from 2013 that eventually aired on television in 2014, making them eligible for the 2015 Emmys.

The piece tells the story of a myriad of Hoosiers, participating in the marathon for a variety of reasons.

"You have a 16-year-old girl, a 40-year-old ex-Olympian and then you have a 91-year-old guy that is running a half-marathon," Jet explained.

The Greencastle native maintains his roots, living and working alongside his wife from their home in the county they grew up in.

"But then I started getting approached about doing commercial work and I kept putting it off because I didn't have a brand that was specific for commercial work. So I decided in 2012 that I would start Lightspan Studios along with my wife," Kaiser said.

The Emmys break down the various aspects of television based upon both programming and geographic region.

In addition to the big awards that many are aware of, television is so vast that there are a slew of Emmy Awards that are given on a regional scale to help highlight quality work being done around the country.

Kaiser has been nominated for the cinematography work on "Because I Can" in the Crafts Photographer - Program (non-news) category and as an editor for that same video (alongside executive producer Blake Boldon and producer Laura Neidig) in the Promotion -- Program Sports category.

The couple primarily does work in the greater Indianapolis area as well as some work in Chicago and around the world for their destination wedding videos, though they would like to expand into some of the smaller market around Putnam County.

While Dani is a graduate of South Putnam High School, Jet was homeschooled and knew early on what he wanted to do.

"From a kid, I was one that would steal the family video camera and go out and make short films in the backyard," Kaiser said.

As for working alongside his wife to produce still and moving images, he knew he wanted that too.

"We made sure we could work well together before we tied the knot," Kaiser said only partially joking.

"I always wanted a husband and wife company in the visual realm."

Kaiser's humble beginnings in the visual world were photographing a friend's wedding as part of a school project.

"One free wedding turned into a $200 wedding and now we're really catered to high-end, celebrity and destination weddings." Kaiser explained.

"It's something I laugh about now but then you look at how far you've come."

On being nominated for the Emmys, Kaiser couldn't be happier.

"I think it's fantastic. There is a lot of work that goes into video production and we're surrounded by video. You almost get desensitized to all the video but all those videos were created by someone and a lot of blood, sweat and tears go into video production so it's really nice to be recognized for the hard work," Kaiser said.

"It's really nice to be recognized on such a grand scale."

Although Kaiser will not be in attendance, the National Academy of Television Arts and Sciences will present its Lower Great Lakes Chapter Emmy awards June 27 at Banker's Life Fieldhouse in Indianapolis.

An Emmy Award, or possibly two, would be quite an achievement for the production companies forged and maintained in Greencastle by the Putnam County natives.

"You have to start somewhere. We started here in Putnam County and that's where we'll continue to be," Kaiser said.

For more information or to watch the Emmy-nominated "Because I Can" interested persons may visit the companies can be found online at www.jetkaiser.com or www.lightspanstudios.com.