John Gregg hopes to close gap after tight race in 2012 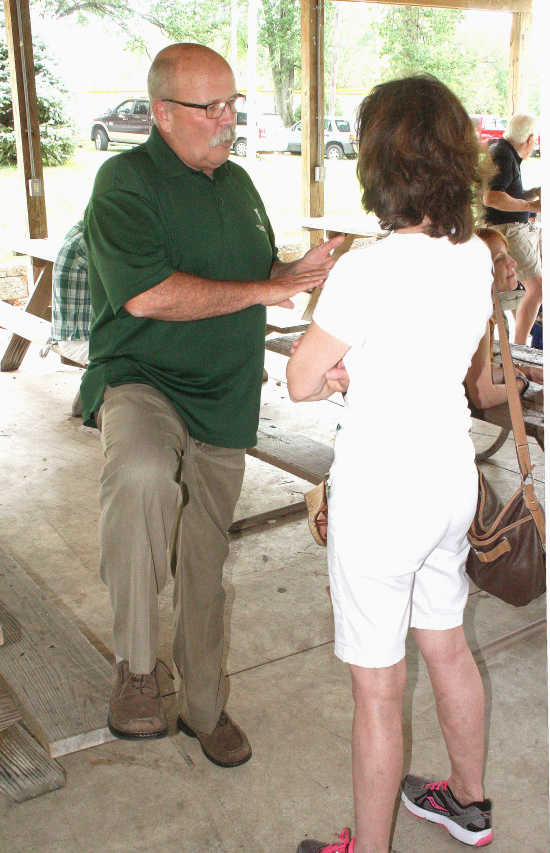 Having lost the Indiana governorship to Mike Pence in 2012 in the closest race in more than 50 years, Democrat John Gregg is determined to put up an even better fight in 2016.

Waging an almost whimsical campaign that sometimes featured his mustache more than his message in 2012, Gregg nonetheless went from supposed cannon fodder for the Republican favorite to making it a race in which only 81,664 votes statewide separated the two men.

And political wags were left to wonder how it might have turned out had Libertarian hopeful Rupert Boneham (he of "Survivor" beard and tie-dyed shirt fame) not siphoned off 101,028 votes.

This time, the 60-year-old Gregg told Putnam County Democrats Sunday afternoon at their Robe-Ann Park picnic, Pence is "going to have to run on his own record. I refer to it as a record of shame."

In 2012, Pence was riding the coattails of Mitch Daniels, Gregg said he discovered as he campaigned over a 22-month period in the 2012 race.

While Pence has been focused on social issues like the Religious Freedom Restoration Act (RFRA) that Gregg says can divide Indiana, the Democrat candidate said he is all about jobs, education and infrastructure.

Gesturing out toward the green park surroundings all around him, Gregg who resides at Sandborn in Knox County, was quick to compliment Greencastle Sunday.

"This is such a beautiful town," he said, "just such a great place to raise a family. That's what Indiana is all about.

"Indiana's also about being inclusive and welcoming all peoples whether we agree with them, look like them, act like them or anything. That's Hoosier hospitality," Gregg added to applause from those assembled at Shelterhouse No. 1 overlooking the bandshell.

Indiana is not about the RFRA "that wasn't even necessary" or any like social initiatives, Gregg said.

"What we're about is jobs, good-paying jobs," the 16-year veteran of the Indiana House of Representatives who spent six years as speaker of the House said. "We're going to work to close that income gap. It's not just about jobs, it's about living-wage jobs. It's about taking advantage of our opportunities in technology."

He took time to praise Greencastle's local government, led by Mayor Sue Murray, who introduced Gregg to the picnic audience.

The need to "work with local government rather than against it" is something Gregg believes is necessary to strengthen Indiana for the future.

"We need to quit hamstringing local government and good things will fall into place," he suggested.

Gregg has said he is focused on building a team and resources "needed to defeat Mike Pence in 2016 -- not on anyone or anything else."

He will have Democrat primary opposition this time as Supt. of Public Instruction Glenda Ritz has announced her candidacy for governor. A third Democrat, State Sen. Karen Tallian of Portage, is also running.

"We've got a little primary challenge," Gregg acknowledged but set his sights squarely on Gov. Pence.

"I'm running for governor because Indiana needs a new direction, a fresh start and a leader that focuses on the things that improve all our lives, not an out-of-touch political agenda," Gregg's campaign statement says on his website.

"Sadly, under Mike Pence, Indiana has been given a bad name. While working Hoosiers are falling further and further behind, he's been focused on social issues and telling people how they should live their lives. That's not the business of a governor or any government."