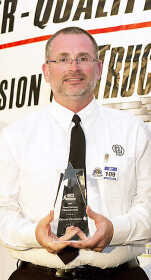 William Goins, of Cloverdale, was recently awarded grand champion of the 2015 Indiana Motor Truck Association. He will be competing in the national contest in Missouri. (Courtesy photo)

This year over 170 drivers competed for the title of grand champion.

Goins, of Cloverdale, will be competing in the American Trucking Association's National Truck Driving Championships Aug. 11-15 in St. Louis, , along with more than 415 top professional drivers from across the United States.

Goins has achieved more than two million lifetime safe driving miles during his 28 years in the trucking industry. He is an IMTA Master Truck Driver and a 2013 IMTA Driver of the Month.

He has competed in the IMTA's Truck Driving Championships twice previously. This is his first grand champion award. Goins has been a roadside angel a few times, assisting roadside responders.

Personally, Goins has also been involved in Haiti missions for more than 20 years.

Goins is married to Melissa and they have two children, Jennifer and Benjamin.

The Indiana Truck Driving Championships is a competition of professional truck drivers hosted each year by the Indiana Motor Truck Association's Safety and Maintenance Council.

There are nine classes of competition, all of which include course driving tests that require intricate and precise maneuvers.

Drivers are judged based on driving skills within specific time constraints. The course problems are designed to simulate conditions encountered in actual truck operations on the streets and highways. In addition to driving skills, each driver is graded on a written test which includes questions related to safety rules and regulations of the trucking industry.