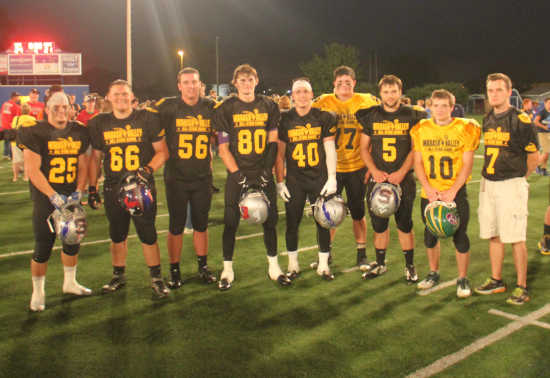 TERRE HAUTE -- It was a great night for football Saturday when the weather provided clear skies with an easy breeze and the Wabash Valley Coaches Association All-Star game gave fans a thrilling end to a 24-21 win by the Gold Team.

All four Putnam County schools were represented in the star-studded game. Lucas Lorian and Zane Yon were playing for South Putnam, Danny Smith and Jensen Conlin for North Putnam, Nate Tesmer, Zach Secrest and Sedrick Weinschenck for Greencastle all on the Black team. 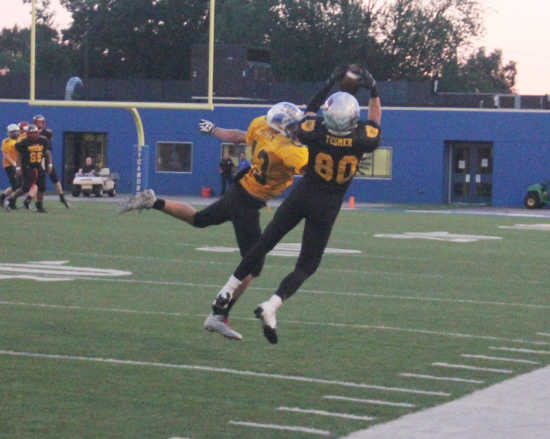 GHS graduate Nate Tesmer catches a pass near the sideline. Tesmer caught a touchdown pass in the fourth quarter to give the Black Team the lead.(Banner Graphic/JAY LOCKETT)

"It was really good," Smith said. "This is definitely the best group of guys, skill-wise that I've ever played with. Everybody played hard. You could tell. It was a fun week. I met a lot of new people."

Yon, who had a mild shoulder injury, didn't believe he would be able to play in the game, however Greencastle's Weinschenck was also injured and unable to kick which allowed Yon take part in the kicking duties for the Black Team.

Eagle teammates Yon and Lorian, got a chance to experience sharing the backfield with Greencastle's Tesmer on the Black Team. All three will be attending Manchester University in the fall. 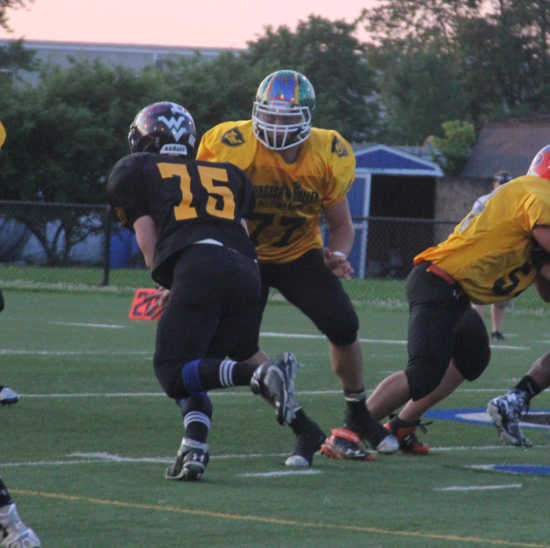 "It was a lot of fun," Tesmer said. "Intensity was high and it was great playing with these new people. It was fun."

"I honestly didn't know the ball was going to be thrown to me," Tesmer said. "It was and I was like 'cool' I caught it." 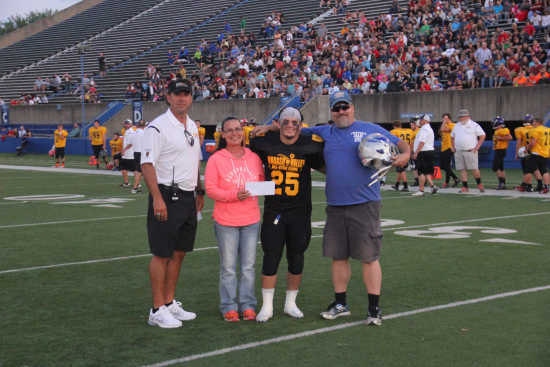 However the Gold Team, which struggled to gain yardage in the fourth quarter, used a variety of plays to push the ball down the field. With Lotz in the right tackle slot and a shifty quarterback, the Gold Team made the push all the way down the field and eventually punched in a rushing touchdown to get the 24-21 lead.

"It was a blast playing on this college field with the big stands and the crowd," Lotz said. "The crowd really got into it. It was fun playing with new guys and meeting new friends."

Lotz plans to attend Marian and will be majoring in exercise science. 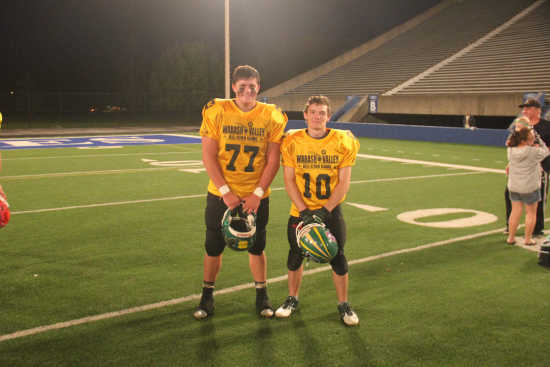 Tyler Lotz and Ethan Boyd of Cloverdale stand together as the only Putnam County members on the Gold Team. (Banner Graphic/JAY LOCKETT)

Coaching for the Black side was South Putnam head coach Nathan Aker who has coached in the event three times.

"It's special every time, especially when you get to coach your own guys," Aker said. "When you walk off that field in November you don't know if you'll get to do that again. But the way our team was set up I got to coach Jensen Conlin all week at D-line. What a great kid. That was awesome."

Aker said he enjoyed the time coaching alongside his rivals as well as the other kids and coaches in the area schools.

"Zach Secrest at linebacker is phenomenal," he said. "I stood behind him every day and watched him make plays. Wabash has got a heck of a player coming. Tesmer in the second half he was the man. We've got big rivals and when you come into a setting like this it's really neat."