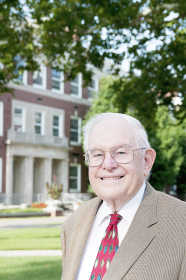 John J. Baughman, professor emeritus of history at DePauw University and 1948 graduate of the university, will be presented with the 2015 Ministry of Memory Award at the annual meeting of the Historical Society of the United Methodist Church.

The presentation will take place Tuesday at Garrett-Evangelical Theological Seminary in Evanston, Ill.

The award is presented "to recognize and encourage excellence in archival and historical work in the local church, annual conference, jurisdictional or central conference," according to information from the organization. "All annual, jurisdictional, and central conferences are invited to participate in nominating a person to receive award. Consideration is given to any person, clergy or lay, who has demonstrated superior work in one or more areas of archival or historical work within or beyond the local church."

A professor at DePauw from 1953 through 1992, Baughman has been active in support of the study of Indiana United Methodist Church history for more than three decades. As chairman of the Joint Archives Committee at DePauw University he provided leadership to the committee that advises the archives on its mission, plans and activities. He continues on that committee as an honorary member.

Baughman was also a member and chairman of the South Indiana Conference Commission on Archives and History that serves as a liaison between the local churches and the Archives. In that capacity he led efforts to recognize the work of local church historians and memorialize deceased Indiana Methodist ministers.

Baughman was a co-founder of the South Indiana Conference United Methodist Historical Society in 1995, wrote a brief history of the conference for the new organization's first meeting, helped to organize some of the society's programs and led efforts to create an online map of historical sites in the state. He also organized and led the South Indiana Conference Bicentennial Coordinating Committee that worked to arrange for activities in celebration of the bicentennial of Indiana United Methodism, such as an essay contest, subject histories of Indiana Methodism in the form of Sunday morning worship service bulletins and a local church history writing workshop and competition.

Baughman is the author of "Our Past, Their Present: Historical Essays on Putnam County, Indiana" and "United Methodism in Indiana" and co-authored "DePauw University: A Pictorial History." The professor has also been published in the Journal of Modern History, French Historical Studies and Proceedings of the Indiana Academy of the Social Sciences and has served as the official historian for DePauw as well as Putnam County.

He is past president of the Historic Preservation Society of Putnam County. In 1998, he received an Alumni Citation from the DePauw Alumni Association in recognition of outstanding University service.

Baughman served with the United States Army in Europe from 1943 to 1945 and received the Order of Purple Heart, Combat Infantry Badge.

In 2010, Baughman provided the narration for a 1941 DePauw admission film which previously had no soundtrack.