One dies in moped crash near Fillmore 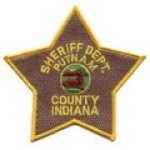 FILLMORE -- A male subject died overnight in a moped crash near the intersection of County Road 50 South and County Road 625 East.

Putnam County Sheriff's deputies and the Putnam County Coroner have yet to release the man's name, as next of kin has not been notified.

Capt. Tom Helmer of PCSD reported that the man was apparently eastbound on 50 South just east of 625 East when he failed to negotiate a curve.

Upon leaving the roadway, the man's moped skidded across a gravel driveway and struck a guy wire for a utility pole, which ejected the man from the cycle.

The man slid across the ground, while the moped went on to strike a tree.

Authorities are unsure when the accident occurred, but a passing motorist noticed the moped and the man lying on the ground and notified dispatch around 6:30 a.m.

The person then told dispatch the body was cold and they could not get a pulse.

The man's body was taken to Terre Haute Regional Hospital for an autopsy and toxicology tests with Dr. Roland Kohr.

While authorities cannot be certain of the time of the accident, there is a chance it is related to a call investigated by Deputy Matt Biggs earlier in the evening.

Around 2:30 a.m., Putnam County Dispatch received a report of a moped driving aggressively and erratically on Indianapolis Road in Greencastle.

The caller said the rider was all over the road, passing in turn lanes and running traffic lights. The moped from the report was last seen eastbound on Fillmore Road.

Biggs investigated the incident but could not locate the rider.

Story will be updated when the name of the driver is released.