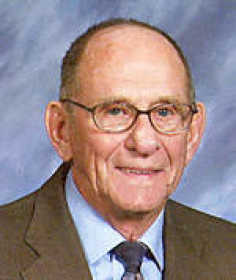 He was a 1937 graduate of North Salem High School. He was in the last class to graduate from Canterbury College in Danville, Ind., and received his Master's Degree from Butler University.

Throughout the years, he had attended Indiana State University and Indiana University for continuing education.

Zeke served in the Army Air Corps, and then transferred to the 186th Infantry 41st Division, during World War II, serving in The Philippines and Hiroshima, Japan, after the bombing.

He was an elementary and high school principal and coach at Fillmore High School, North Salem High School and Roachdale and Bainbridge elementary schools until his retirement in 1985.

He was a member of the Indiana Retired Teachers Assn., Fillmore Christian Church and the Bainbridge Lions Club.

Zeke was an avid fisherman, especially fishing for crappie.

He was also preceded in death by his parents, sister, Ernestine Fishback, and a brother, Glendon Alexander.

He is survived by his son, Stephen Alexander and wife, Betty; stepdaughter, Virginia "Gini" Boyce and husband, Kenneth; a stepson, William Kumpf Jr. and wife, Mary; 11 grandchildren; and 28 great-grandchildren; one great-great-granddaughter; and special friend Nonie Delp.

Funeral services will be conducted at 1 p.m. Wednesday, Aug. 5 at the Hopkins-Rector Funeral Home, Greencastle

Interment with military honors will follow at Fillmore Cemetery.

The family will receive friends from 11 a.m. until time of service on Wednesday at the funeral home.