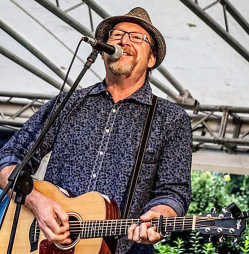 No tickets are required for the 7:30 p.m. event. The festival's performances are supported by free-will donations, individual contributors, an endowment at the Putnam County Community Foundation and the Inn at DePauw.

"I'll be joined by Jan Lucas-Grimm, my wife, on harmony vocals and harmonica, Connor Grimm, my son, on bass, Diederik van Wassenaer on fiddle, and Eric Lambert on guitar," Grimm said. "In the first set, we'll focus on songs from my latest release, 'The Turning Point.' After intermission, the second set will feature songs of the rural Midwest."

Festival founder and director Eric Edberg is particularly excited about this week's event.

"One of our main goals is to use live music to bring the community together in an informal and interactive environment, with 'friends making music for friends,'" Edberg said. "In recent years we've expanded our offerings to include folk, jazz, blues and even rock music. This is part of those efforts -- and having Tim perform with members of his family as well as music friends is what we're all about. I'm sure the regular concertgoers and our guest performers will make a lot of new friends this Wednesday."

Grimm has toured and recorded with his friend and two-time Grammy winner Ramblin' Jack Elliott, appeared with Harrison Ford in the film "Clear and Present Danger," and has shared the stage with writer and poet-farmer Wendell Berry.

His recording, "The Back Fields" was named Best Americana Album in the 2006 Just Plain Folks Music Awards in Los Angeles (the largest and most diverse music awards in the world). Named 2000's "Best Discovery in Roots/Americana Music" by The Chicago Sun-Times, and "2004 Male Artist of The Year" by the Freeform American Roots DJs, his songs and performances have established him as a unique voice in Americana music.

Each of his past four recordings have reached the top of the folk, American-roots or Euro-Americana charts.

Grimm walks the fine line between folk and country, while maintaining a strong footing in tradition. Listeners can hear the rural rumblings that have shaped his life, but are also invited into a bigger picture, as evident in so much of his work. Critics searching for comparisons most often cite Johnny Cash, Woody Guthrie and (Nebraska era) Bruce Springsteen.

Grimm is an award-winning songwriter, and actor on stage and screen. After several years working in Los Angeles (where he co-starred for two seasons on the NBC drama "Reasonable Doubts" and appeared in several films), he returned home to Indiana.

He grew up in the woods and small town settings of southern Indiana, son of schoolteachers and grandson of farmers, and his return home was a conscious choice to live a life of significance rather than one of "success." He now lives with his wife and sons on an 80-acre farm close to where he grew up.

Grimm's songs are full of the rural rumblings that have shaped his life -- rich with descriptive details, and sung with warmth and intimacy -- recognizing the inextinguishable national romance with the idea of the family farm and the vanishing landscape of rural America.

In 2007, Grimm put together a concept CD with several Midwest songwriters, including Krista Detor, Carrie Newcomer, Tom Roznowski and Michael White. The recording, "Wilderness Plots" was drawn from the short stories of noted author, Scott Russell Sanders, and explored the settling of the American wilderness in the Ohio River Valley Region between the Revolutionary War and the Civil War. A PBS arts documentary of the show and its background was nominated for an Emmy Award.

Grimm has performed in theaters and coffeehouses around the United States and parts of Europe, as well as significant festivals, including the Kerrville Folk Festival, Wildflower Festival, Fox Valley, The Gamble Rogers Folk Festival, the Pawtucket Arts Festival and the Indiana Festival at Conner Prairie and hosts the Americana Music Series in Indiana.

He continues to act in film, most recently in "The Express" with Dennis Quaid.

The festival will continue next week with the four-woman music theater event "The Breeze Bends the Grass" on Wednesday, Aug. 12.