Short doubles up on busy weekend at Lincoln Park 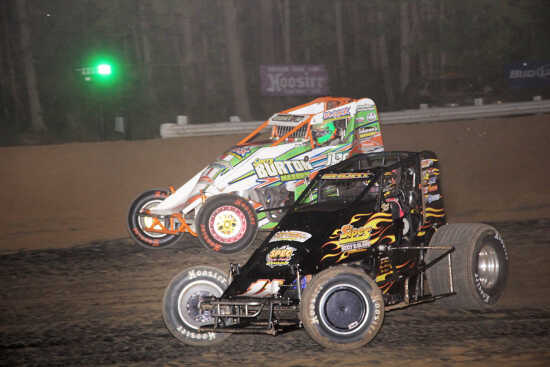 Brady Short (No. 11p) battles for the lead with Jeff Bland Jr. (No. 04) on Saturday night in the Midwest Sprint Car Series feature. Short got past Bland near the midway point of the 30-lap A-main and went on to claim his third straight feature victory. (Banner Graphic/Carey Fox)

PUTNAMVILLE -- Brady Short pulled off the double dip over the weekend, taking home the sprint car features on both Friday and Saturday at Lincoln Park Speedway. Saturday's victory paid a cool $3,000 as Short scored the Midwest Sprint Car Feature victory ahead of Shane Cottle and Jeff Bland Jr.

In the UMP Modified division, 33 cars were on hand with various drivers getting a look at the Putnamville oval ahead of the "Patriot 100" event on Aug. 29. Tyler Nicley of Owensboro, Ky. Picked up the victory and has already figured out the track after running second in the "Patriot 100" the last couple of years. On this night, he got past Friday's winner, Joe Godsey, to pick up the victory as Jake Humphrey crossed the finish line ahead of Kenny Carmichael Sr. and Jay Humphrey.

Kenny Carmichael Jr. washed away some recent frustration in the UMP Super Stock division by pulling away for a dominating win. Doug McCullough, Josh Boller, Steve Peeden and Jonathon Newgent wrapped up the top-five.

There were 125 cars on hand this weekend to wrap up a busy weekend of racing at LPS after Friday's event.

A 29-car field was on hand for the MSCS race and Short picked up right where he left off as he battled his way past Bland and Mitch Wissmiller by the halfway point of the 30-lap MSCS race. He went wheel-to-wheel with Bland for several laps as both drivers rocked the top-side cushion to remain ahead of the competition. The pair built a solid margin as Cottle worked on reeling the duo in with Wissmiller, Casey Shuman and Brent Beauchamp in tow.

Short made a successful pass of Bland for the lead as the lapped traffic came into play. A caution flew moments later, but Short's pass would stick.

On the re-start, Short would remain out front as Bland and Cottle fought for second ahead of Beauchamp. Short began to pull away over the final 10 laps as Cottle overtook Bland near the end of the race. Bland would hold on to a three-second advantage over Beauchamp for third with Hopkins placing fifth. The win was Short's 13th A-main win of the season.

Godsey has proved to be a dominant force during the last half of the season at Lincoln Park Speedway as he's run first or second in every visit to LPS this season. A night after he held off a charging Devin Gilpin to gain a little ground in the UMP DirtCar National Points, Godsey ran led early before Nicely was able to run him down with several laps remaining. Currently third in the UMP National points, Godsey also ran second to Nicely in the first of four heat races. Nicely would start eighth in the A-main and worked his way forward against some of the top modified drivers in the region.

In the UMP Super Stock feature, Carmichael Jr. took advantage of a good starting position (second) and ran away from the field to get the victory after his competition got bunched up on the start. Once he was able to get some breathing room, it was clear sailing for Carmichael as McCullough placed third ahead of Boller.

Tim Wright had a busy week in prepping his car for racing on Saturday night as he noted that his crew spent nearly 40 hours on the car to get ready for action. It paid off as he battled his way past Almanza and Smith on lap seven and held off Smith for the win.

Heramb started seventh in the second bomber feature and advanced to the lead after several early cautions and then roared away to the win ahead of Tom Courtney and Ryan Foncannon.

This weekend will be a regular show with sprints, modifieds, super stocks and bombers.