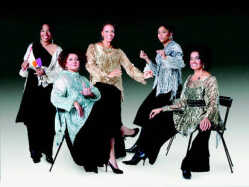 Courtesy photo
The soulful a cappella ensemble Sweet Honey in the Rock returns to the Green Center for the Performing Arts on Friday, Oct. 9 at 7:30 p.m. The performance is included in the 2015-16 All-Access Season Pass, online sales of which begin Aug. 16 at midnight.

Curiosity abounds as local audiences anticipate which guest artists the DePauw University School of Music will invite to perform each year. Dwindling days of summer mean the wait is soon over: Six stellar ensembles will travel to town this season to activate Putnam County's collective imagination.

The popular All-Access Season Passes are back at $75 per person or two for $100. Online sale of passes and individual tickets begins Aug. 16 at midnight.

Opening the Green Guest Artist Concert series on Sept. 11 will be the "century-spanning, globe-trotting" string orchestra A Far Cry. Along the way there will be visits by the African-American a cappella ensemble Sweet Honey in the Rock (Oct. 9); jazz man Judson Green and Eighth Element (Nov. 5); Greencastle's good friends to the east, the Indianapolis Symphony Orchestra (Feb. 21), with soloists Caroline Shaw and Shara Worden; and from the far side of the Atlantic, the bonny Irish band Danú (Mar. 10).

The series concludes with a "Performance Plus" concert by Decoda (April 16), the School of Music's new artists-in-residence from New York City.

Founded in 2007, A Far Cry is proud to call Boston home as chamber orchestra-in-residence at the Isabella Stewart Gardner Museum. At the forefront of a new generation in classical music, the Grammy-nominated orchestra "brims with personality," according to The New York Times. The ensemble's latest album, "Law of Mosaics" from its in-house label Crier Records, earned a place on The New Yorker's Top-10 list of "Notable Recordings of 2014" and praise from WQXR's Q2 Music, which named the group one of its "Imagination-Grabbing, Trailblazing Artists of 2014." At DePauw, the ensemble will perform its TransAmerica program (Friday, Sept. 11), imagined as a journey through the American continents from Philip Glass's New York to Alberto Ginastera's Argentina, crossing the borders of four distinct musical cultures along the way.

The internationally revered a cappella ensemble Sweet Honey in the Rock, which last performed at DePauw in 1998, has been producing music for more than four decades. With Grammy Award-winning style, they plan to entertain as well as empower the audience (Friday. Oct. 9), weaving together traditional Gospel songs and spirituals with their own original music, rhythms and stories. The Fort Worth Star Telegram says, "This ensemble is the gold standard ... Their voices are all fabulous, and they unite to create a sound so pure and smooth and homogeneous that it does not seem humanly possible."

An impressive talent as a composer, pianist and 21st-century musician, Judson Green, DePauw Class of 1974, will infuse his love for music in a jazz-inspired concert of his original compositions (Thursday, Nov. 5). In addition to his evening concert with Eighth Element, there will be an exceptional opportunity to meet with one of DePauw's most successful alums in an 11:30 a.m. workshop, "Lessons Learned From Jazz," using jazz as a platform to entertain and teach lessons on leadership, creativity and change.

"The music that flows out of Judson Green," says renowned cellist Yo-Yo Ma, "cannot be separated from the inspiration behind it: love for family and the environment. Nor can the brilliant mind that loves to solve complex problems be separated from his dedication to help young people find a path in music -- all of which are inspired by the fundamental principles he found through playing jazz." Both events are part of ArtsFest 2015: Art & Transformation (Oct. 28--Nov. 8).

In 2013, Caroline Shaw became the youngest composer ever to win the Pulitzer Prize for Music. Shara Worden, who studied operatic voice and classical composition, has lent her voice to various artists like David Byrne and Bon Iver. These celebrated women will join conductor Edwin Outwater and the Indianapolis Symphony Orchestra (Sunday, Feb. 21) to perform original compositions from the contemporary classical genre, coupled with standards of the orchestral repertoire that inspired these young artists along their journey to become composers and performers.

One of the leading traditional Irish ensembles in the world, Danú's standing-room-only concerts are a glorious mix of high-energy performance, ancient Irish music and new repertoire. Having performed around the globe and recorded seven critically acclaimed albums, for a special St. Patrick's celebration (Thursday, March 10), Danú will transport listeners on a memorable and moving musical journey to the Emerald Isle. There'll be slides and reels, jigs, waltzes and piping aplenty, from sweeping melodic fiddle airs to seamless accordion runs.

The school's 2015-16 artists-in-residence, New York City-based chamber ensemble Decoda, will conclude its yearlong residency and the Green series with a "Performance Plus" concert (Saturday, April 16). These passionate arts advocates, known for innovative performances and projects designed to engage audiences and artists alike, will travel to Greencastle for three residencies at DePauw: Oct. 5--7, March 29--31 and April 14--16. For up-to-date details on Decoda's activities this season, check the School of Music's Online Event Calendar (depauw.edu/music) as these dates approach.

All Green Guest Artists events, along with the Faculty Select Series -- plus the Little Women Festival (Sept. 2--May 4), Holiday Gala (Dec. 5--6), Living Composers Festival (Feb. 8-14), Music of the 21st Century (Feb. 15--19), Opera at DePauw (March 3--6) and all School of Music ensemble concerts -- are included in the convenient All-Access Pass.

Tickets for all area students, seniors over 65, and youth, 12 years and younger, are free thanks again to season sponsors Judson and Joyce Green. To ensure that any person wishing to attend a performance is able to do so, a pay-what-you-can option is also available, online and on request.

For additional concert details, assistance with ordering passes or purchasing individual tickets, visit depauw.edu/music/tickets, depauw.instantencore.com, or call the Green Center at 658-4380. Audience members are encouraged to obtain passes or tickets in advance to ensure adequate seating.