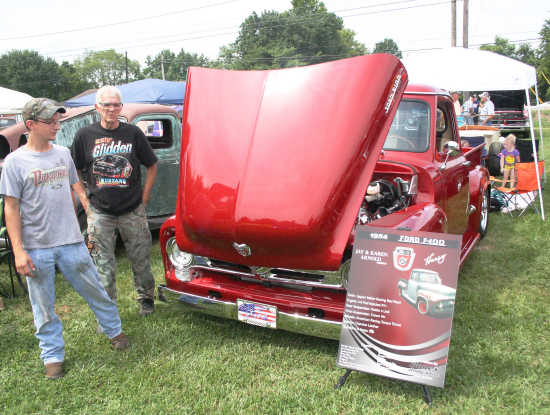 That was the shining take-away from the sixth annual Children's Miracle Network Car Show that brought more than 150 vehicles to the Putnam County Fairgrounds Saturday.

Among those gleaming in the noonday sun was the brilliant Jaguar Italian racing red pearl-colored 1954 Ford F-100 pickup truck that earned Best of Show honors for Jay and Karen Arnold of Plainfield. 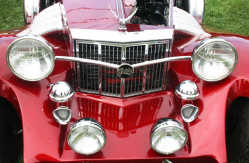 Banner Graphic/Eric Bernsee
Above is the deceiving front end of the 1934 "Gatsby" created and exhibited by Richard Evans of Brazil.

Also standing out was the stylish 1954 Ford Skyliner with the see-through top owner by Jim McAfee of Russellville who positioned an old magazine ad on the back seat that fittingly read "the most distinctive car under the sun."

Or perhaps the bright red 1940 Ford coupe of Al Seidel of Indianapolis or the candy-apple red 1950 Mercury Phil Humphreys of Greencastle acquired recently may have tripped your trigger.

But certainly the most unique vehicle on display was the "1934 Gatsby," as owned Richard Evans of Brazil calls it.

The stylish roadster, reminiscent of the Duesenbergs and Auburns of that Gatsby era, is a creation Dr. Frankenstein would love. Parts from no less than nine vehicles have been salvaged to create Evans' Gatsby.

"Everybody thinks it's a kit," Evans said.

And that rankles him a bit. After all he's used his electrician background ("You know," he said, "an electrician's work is about 10 percent electrical and 90 percent mechanical") to create a whole that is certainly greater than the sum of its varied parts.

The frame is a modified 1981 Ford Crown Victoria reshaped and stripped out, he said. The body, meanwhile, has been modified from a 1970 MG Midget. 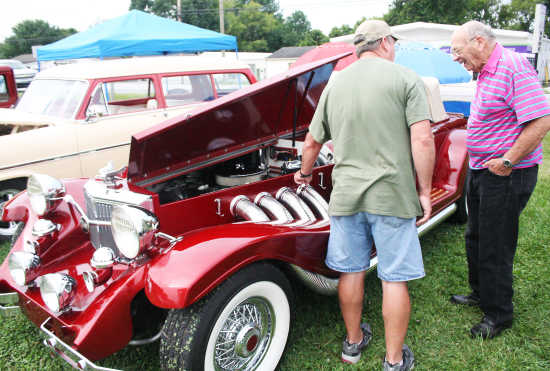 Banner Graphic/Eric Bernsee
Richard Evans (right) shows off his 1934 "Gatsby," which combines the modified frame of a 1981 Ford Crown Victoria and the body of a 1970 MG Midget along with smaller parts from at least nine other vehicles into a stylish roadster.

A 302-cubic-inch Ford engine from that Crown Vic powers the car with a transmission from the same vehicle.

Evans got the idea for his creation after finding a guy in California creating "Gatsbys."

So Evans bought the stylish fenders off him and set about scavenging junkyards and flea markets for the rest of the pieces himself.

It's also got a grille from a 1979 Mercury Cougar, a luggage rack from a Model A Ford, a gas tank from a 1973 Ford van, lights and horns from a 1934 Ford, chrome exhaust pipes from a semi (with parts of a light fixture giving it that finished look as it enters the engine cowling, the gas filler neck from a 1962 Datsun and the air conditioner out of a Mazda RX3.

Then there's the leather seats.

Evans was at the junkyard, looking for an air conditioner that would fit under his dash when he spotted the seats in a wrecked 1980 Honda Civic.

Not divulging just how important those seats were to his creation, Evans asked the junkyard owner how much he wanted for them.

The car even has a second horn -- an ah-oogh-a variety from a 1932 Lincoln that the 84-year-old Evans had waiting for the right opportunity to employ since he was in high school. He mostly just likes to watch passersby jump when he blows the horn.

"I kept track of it all," he smiles, saying he included the hours spent scouring junkyards for what he needed.

Evans, who says he plans to keep driving it "just as long as I can," has been taking the Gatsby to car shows for 26 years, and although he's always attracted attention, he's somehow missed out on the winner's circle.

"I got a trophy one time as the runner-up 'Rat Rod,'" he said, shaking his head. "It wasn't even the best Rat Rod."