World performer to grace the stage 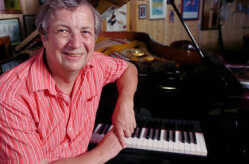 NEW MARKET -- Whether you're looking for a relaxing Sunday afternoon, or if you're just looking for something to do, the Roachdale Revitalization Cooperative Alliance (RRCA) has you covered.

Milne has been recognized as one of the greatest musicians in the world. If you think that's a tall-statement, consider the following:

Milne has officially been declared a "national treasure" and a "musical ambassador" by the Library of Congress in Washington, D.C.

Milne has performed at concert venues world-wide, including Japan, the Parliament of Switzerland and various U.S. Embassies

Milne has never taken a piano lesson in his life

Joe Buser, president of RRCA, is anticipating the event, saying that the performance is a rare opportunity for fans and music lovers of all kinds.

"We are thrilled to host the return of the amazing Bob Milne as we kick off Indiana's bicentennial celebration," Buser said. "This will mark Bob's third appearance in the area and I urge you not to miss this extraordinary opportunity to hear one of the top musicians in the world."

Buser also said that, due to inadequate venue opportunities in the Roachdale area, Southmont High School will be a fitting hall for such a performance, without being located too far for most Roachdale residents.

Milne echoed Buser's excitement. When asked why he, a big-time performer, would come to a small community, Milne said "why wouldn't I come to Roachdale?"

"People are people," Milne said. "There's no one person that's more important than another. I love to play the piano for people and there's no destination that's too big or too small."

The self-proclaimed "ragtimest's" concerts have been described as easy going and educational for members of the audience in the art of rag-time theatre.

Milne said his audience, savvy or not, always "takes something home" from his concerts.

"This is fun," Milne said. "I'm very lucky that I can play a piano at all and be able to do this. I never play the piano at home, and I've never practiced a day in my life -- that's not fun. The only thing that's fun for me is being with people and trying to show [them] how good music is."

Milne, who also teaches music and music history at various universities, is the founder and director of the Frankenmuth Ragtime Festival in Frankenmuth, Mich.

Averaging more than 250 performances around the country each year, Milne is highly sought. Concerning this, he said "if I have been given any ability at all, it is my duty to honor it by trying to improve that ability every time I perform."

The Southmont auditorium doors will open at 1 p.m. on Sunday, Aug. 23, with the concert officially beginning at 1:30 p.m. Tickets are $15 for adults and $7 for children ages 12 and under.

Additionally, attendants are encouraged to stay for the filming of a Montgomery County Movie, set to premier this Halloween.