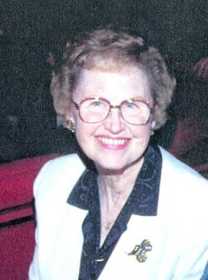 She was born on Dec. 14, 1926 in Greencastle to Herbert Flint and Elizabeth Mae Terry Flint.

Betty was a 1944 graduate of Greencastle High School, attended Central Business College and retired from IBM as a secretary in 1982.

She was a life-long member of Brick Chapel United Methodist Church, and had been a member of the American Legion Auxiliary, Ladies of the Elks Auxiliary and the Putnam County Hospital Guild.

She was preceded in death by her parents; one brother, Jack D. Flint; and her husband, Ferdinand Stauch Jr.

Surviving are two sons, George William Ogle of Indianapolis, and Richard D. Ogle of California; a brother, Donald W. Flint and wife Carolyn of Greencastle; a sister-in-law, Shirley A. Flint of Greencastle; a daughter-in-law, Brenda Stauch of Bloomington; and several nieces and nephews.

The family will receive friends on Wednesday from 11 a.m.. until time of services at the funeral home.

Memorials in Betty's name may be directed to the American Cancer Society.